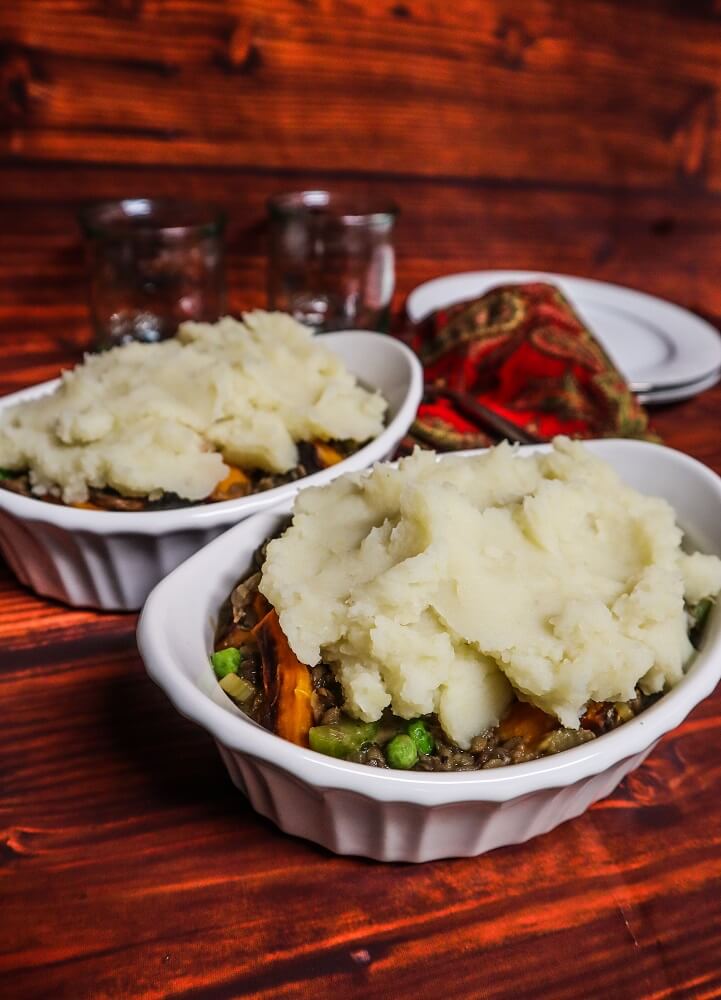 I made shepherd's pie for Thanksgiving this year, and I might make it again for Christmas because I love it so much! It is a dish that takes a little bit of time and love so it is for special occasions.  Since I tend to make quick recipes for dinner most of the time.  I made a new recipe with lentils this time for Christmas, and winter veggies, so I thought I would share the recipe. If you think that shepherd's pie has to be rich and meat filled think again.  I remember having it as a kid with ground beef, and a generic blend of veggies like peas, corn, and carrots in a meat gravy and it was ok, but not my favorite thing.  The mashed potatoes were the only part I really enjoyed at that point.  I have never been a meat lover, always choosing veggies first even before I became vegan.  So when I make my shepherd's pies, I use ingredients I love and veggies that add flavor instead of just being there. Things like leeks, squash and mushrooms plus a few others for color.  I just make the cooking broth into a sort of a gravy to keep it more simple, and it works perfect!  This time I used lentils where the meat would be.  Normally I use tempeh, but I figured I would make a recipe for those who are soy free, and I like to switch things up sometimes.  It was delicious and hearty!  I actually made a larger batch of this recipe a few days before Thanksgiving, to serve on Thanksgiving day day since I knew I wouldn't have time to cook. These reheat beautifully in an oven.  If you are going to serve the next day, skip the oven part after assembly, cover with foil, and refrigerate.  Pop in the oven for about 45 minutes to 1 hour (uncovering the last 10-15), and you have delicious dinner! Add the onion, celery, garlic, and water to a 2 1/2 quart stockpot and bring to a boil.  Lower to a simmer and cook for a few hours until the veggies have released their flavors.  Strain into a container, pressing the veggies against the strainer to extract all the juices.  Let cool, and store in the refrigerator for up to a week, or freeze.