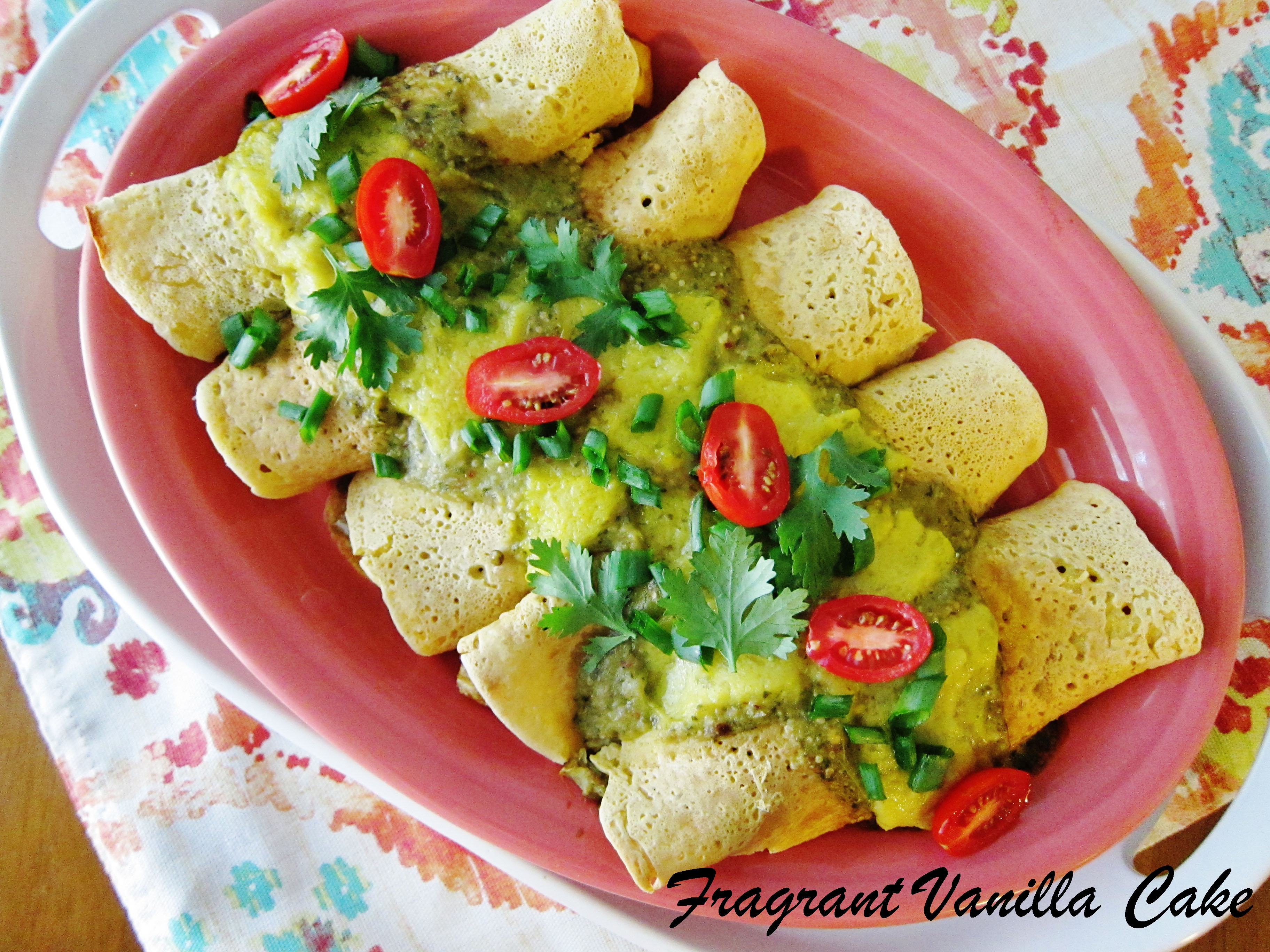 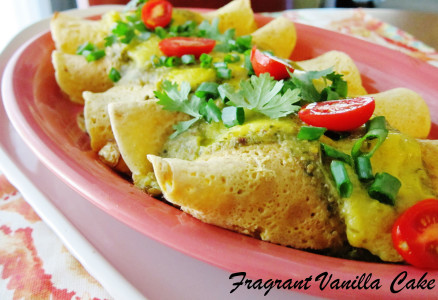 I have never actually used tomatillos before.  I have seen them many times at the store or farmer's market, but passed them up thinking I don't know how to use them, and I prefer to just buy what I know.  But that mind set is boring. And I was wrong to pass them up.  I should have went for it.  Where was my sense of adventure?! But luckily this year in my CSA box, I received some.  I thought immediately I want to make a green sauce for enchiladas! After all, now I make vegan melty cheese and I love Mexican food!  These ended up being a little non-traditional though. 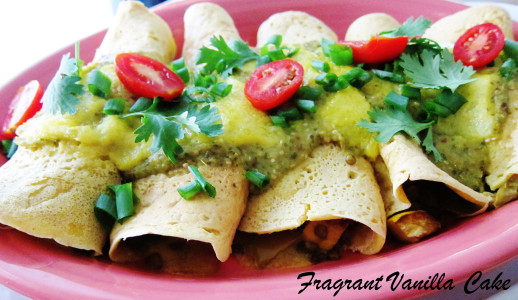 I made chickpea/corn crepe sort of tortillas (which is what I have been doing lately instead of buying them), which were perfect for rolling the filling into.  For the filling I made a mixture of roasted vegetables and lentils. And of course some vegan cheddar cheese (because that was always my favorite part of the enchilada growing up). For the green sauce I roasted the tomatillos, then combined them with jalapeno, cilantro, cumin, and some lime juice and it was sooo good!  This would make a wonderful salsa too in case you aren't interested in making the whole enchilada.  I topped them off with more cheese and baked until it was melted.  They were delicious!  Not too spicy, just enough.  Totally not your typical enchilada, but I loved them. 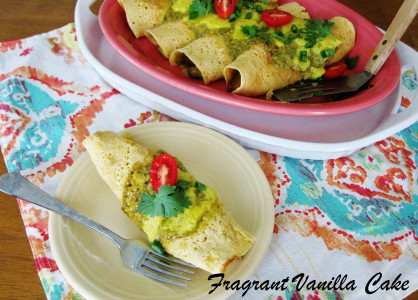 To make the cheese, heat the coconut milk, garlic, cayenne and turmeric in a saucepan, until it comes to a simmer.

Next, add the vinegar and sea salt to the coconut milk.

Turn off the heat and add the arrowroot mixture, guar gum and coconut oil. Whisk for about 30 seconds, then pour into a silicone mold (I used a loaf pan, but if you had another shape you would like to use go ahead). Refrigerate for a few hours until firm, then pop out of the mold. You will need half the cheese for this recipe, reserve the other half for another use in the fridge, wrapped in an airtight container.  Shred the half you will be using into a bowl, and keep in the refrigerator until ready to use. You will be shredding it for the enchilada recipe.  Save the rest for another use.

To prepare the vegetables, spread out the squash and zucchini on a sheet pan, drizzle with olive oil and roast in the oven at 400F degrees for about 20-30 minutes until soft, and starting to brown.  Season with a little sea salt. Let cool. In the meantime, for the lentils, place them in a pot and cover with water by 3 inches.  Bring to a boil, then lower to a simmer and cook for about 30-40 minutes until tender.  Drain, and combine with the veggies. Add the cumin, garlic, chipotle and taste to see if it needs more salt.  Stir to combine.  Set aside.

juice of one lime

To make the sauce, toss the tomatillos with a little olive oil and spread out on a sheet pan.  Roast in a 400F degree oven for about 30 minutes until starting to brown and soft (you can do this at the same time as the filling veggies).  Remove from oven and place in the food processor along with all other remaining ingredients.  Blend until smooth.

To assemble the enchiladas, lay a tortilla*, then spoon the veggies down the center about 3 heaping Tbsp worth.  Sprinkle with a little of the shredded cheese. Roll up and place in an ovenproof dish.  Repeat with the remaining enchiladas.  Then spoon the sauce over them, and top with more cheese.  Cover them, and place them in a  375F degree oven and allow the cheese to melt.  Serve warm topped off with a little more cilantro and some sliced scallions.