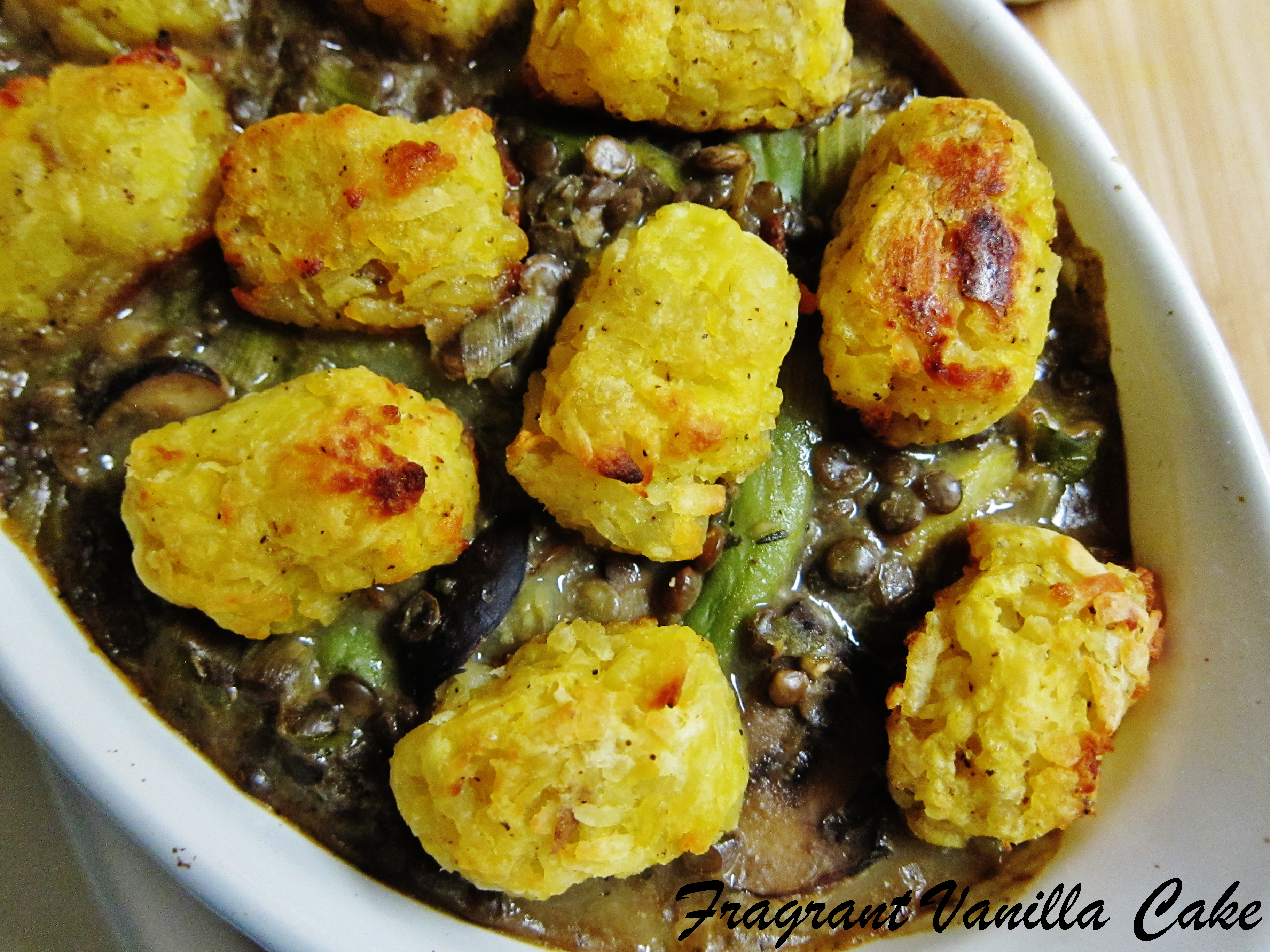 Anyone who lives in Minnesota has had tater tot hotdish in their lifetime most likely, it is pretty much a staple here of Grandmothers to serve to their families, or at church basement functions.  My Grandma made it.  But the funny thing is, I have never been a fan. Usually it is made with cream of mushroom soup, cream of chicken soup, frozen veggies, and tater tots thrown on top.  None of which I liked as a child.  Crazy and blasphemous I know for a Minnesotan.  But for some reason, I saw someone making it on the news the other day and I decided I wanted to veganize it. 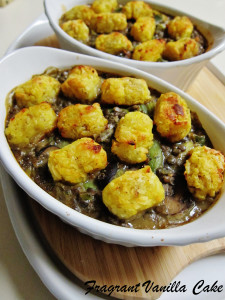 It could be good after all.  It had potential.  Except this was all going to be from scratch, no cream of anything soup, no frozen anything, and no meat.  I even made the tater tots from scratch, and it was actually pretty easy sans the shaping them part which takes a little patience just like scooping meatballs or cookie dough. 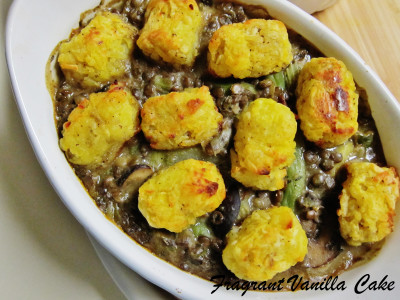 For the base, I made a sort of a gravy like I do for my shepard's pie, and I included mushrooms so it had that cream of soup sort of thing going, but way better and healthier. I had fresh green beans, leeks and celery from my CSA box, so I included those as well for my veggies.  Instead of ground beef, lentils filled in, and I must say they were way more tasty than the beef in the casserole I remember as a child. 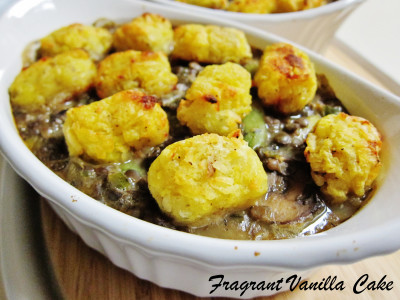 Once the hotdish was all assembled and in the oven, I was pretty pleased with myself.  This was going to be good!  I was excited about it!  It smelled amazing, not like the hotdish I remember from when I was little which made me want to gag.  It tasted wonderful as well. Me and Eric enjoyed it, and it was the perfect dinner for a cool fall evening. This tater tot hotdish was a win!  If you are looking for a special weekend, meal, this is it, and the best part is there are leftovers if you are only serving two, so you can enjoy it the next day as well!

sea salt and pepper to taste

Pre-heat the oven to 425F degrees. To make the tater tots, place the russets in a large pot of salted boiling water on the stove, and bring to a boil.  Cook until the potatoes are just tender but not too mushy, and drain. Let cool until able to handle the potatoes, and grate them into a bowl.  Add sea salt and pepper to taste, and shape the potatoes into tater tots.  Place on an oiled sheet pan, and drizzle with olive oil, tossing them around in it gently to coat them.  Place in the oven and bake for about 20-30 minutes until lightly browned and crisp on the outside.

Meanwhile, to cook the lentils, place in a pot covered with filtered water by a few inches, and bring to a boil.  Lower to a simmer, and cook for about 20 minutes until tender.  Drain, and set aside.

Meanwhile, heat the olive oil in a large stockpot, and add the leeks, thyme, celery, and cook until they have softened a bit, then add the garlic, beans, mushrooms, tamari, nutritional yeast, miso, and water and bring to a boil.  Lower to a simmer, and place the lid on the pot.  Let cook until the veggies are tender, about 10 minutes.  Once they are tender, add the arrowroot mixture, and let cook a few more minutes while stirring until it has thickened. Remove from the heat, and stir in the lentils.

To assemble, spoon the veggie mixture into 4 ovenproof dishes or bowls, then top with the tater tots.