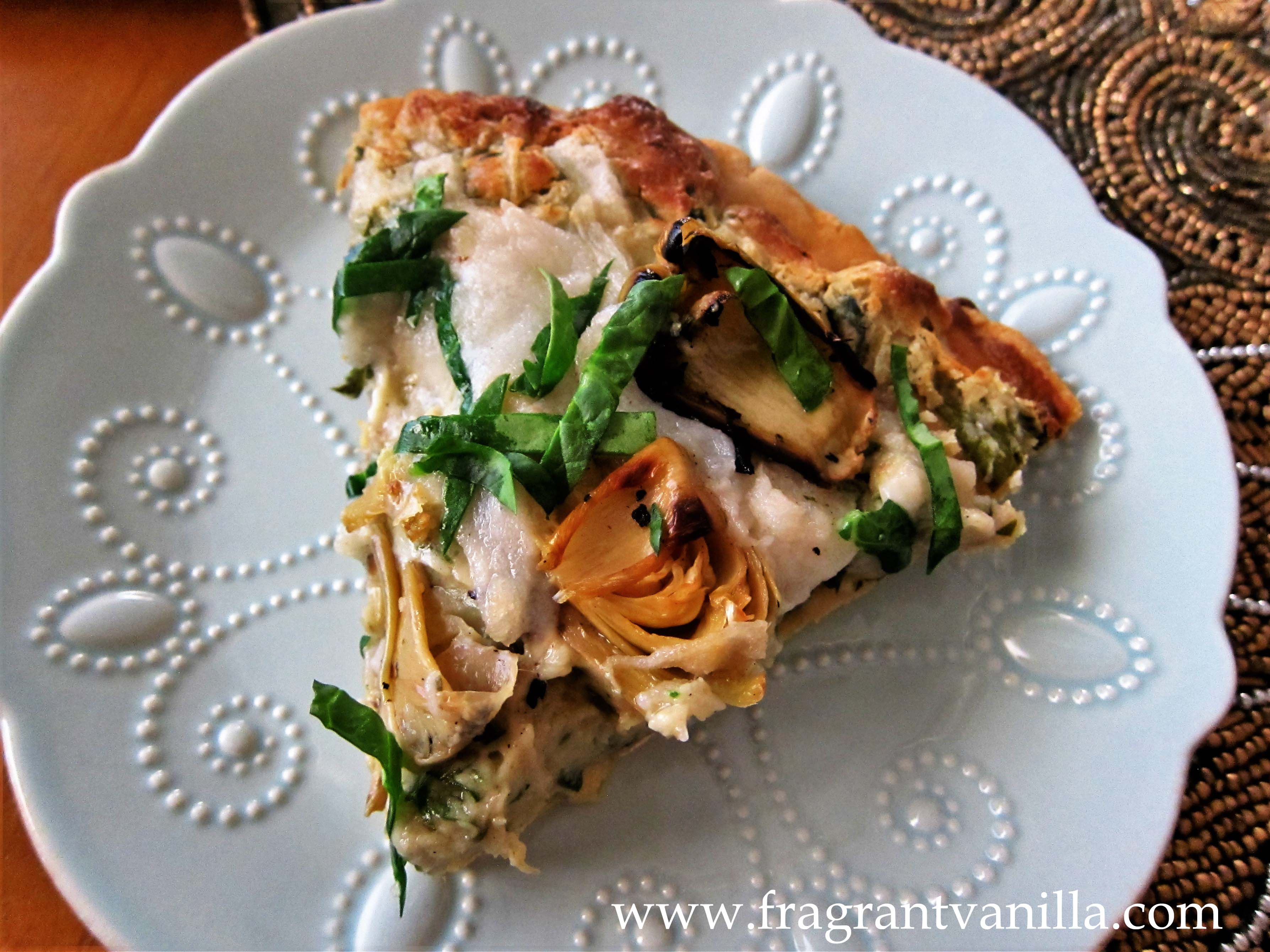 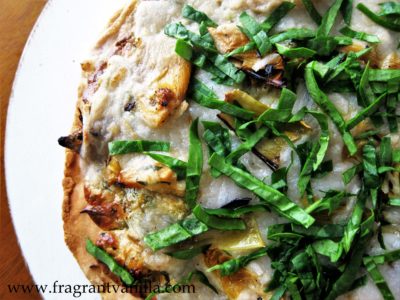 I always enjoyed spinach artichoke dip as a child.  Of course, who wouldn't, it is packed with creamy dairy and artichoke hearts.  It was delicious to me at that point in my life.  Dairy turns me off now, and I really haven't had any spinach artichoke dip in 15 years, but I got it into my head the other day that a vegan version would be really good.  So, I made one.  It was really good, even better than I remember the old one being, so instead of just eating it, I decided to use it as a topping on pizza. 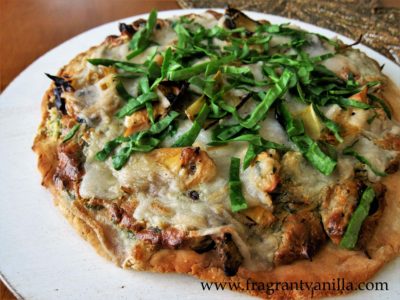 Because we all have to make something a bit indulgent once in a while, right? Plus I was going to be sharing it with Eric and he loves this sort of thing. I had some frozen vegan mozzarella cheese on hand too, so it was perfect!  All I had to do was make the crust really.  I topped it off with some more artichokes and spinach, because one can never have too many veggies, and it was decadent so it needed some lightness. 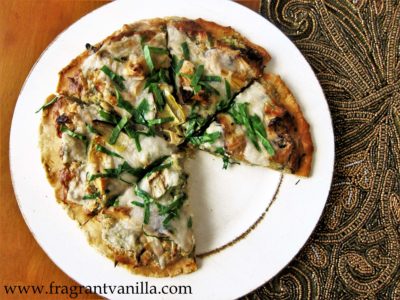 It turned out so delicious!  Definitely comfort food, but a nice crunchy crust, gooey topping, and savory artichokes and spinach.  Who says vegans can't have pizza and cheese?!  This tasted even better than dairy cheese and artichoke dip. If you just went vegan and are missing pizza and cheese, give this a go! 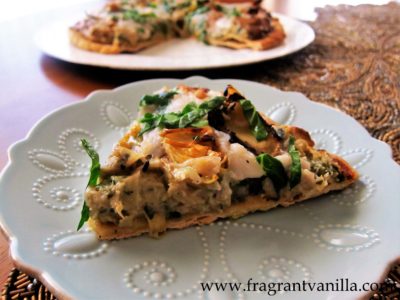 To make the mozzarella cheese, heat the coconut milk in a saucepan, until it comes to a simmer.
Meanwhile, dissolve the arrowroot starch in the water and set aside.
Once the coconut milk has come to a simmer, add the agar flakes, and heat until they are dissolved (mine took about 8 minutes, if you are using the powder, it should dissolve within one minute).
Next, add the lemon juice and sea salt to the coconut milk.
Mix the arrowroot with the filtered water until dissolved.
Mix the coconut oil with the guar gum so that the guar gum does not clump up.
Turn off the heat and add the arrowroot mixture, guar gum and coconut oil. Whisk for about 30 seconds, then pour into a silicone mold (I used a loaf pan, but if you had another shape you would like to use go ahead). Refrigerate for a few hours until firm, then pop out of the mold. You will need half the cheese for this recipe, reserve the other half for another use in the fridge, wrapped in an airtight container. Shred the half you will be using into a bowl, and keep in the refrigerator until ready to use.

Combine the cashew butter, lemon juice, coconut milk, garlic, sea salt, cayenne and blend until smooth. Add the spinach and artichokes and pulse briefly to distribute them evenly. Remove from the food processor and set aside in a bowl in the refrigerator.

Pizza Dough:
2 cups gluten free all purpose flour
1/2 tsp sea salt
1/2 tsp guar gum
1/2 cup plus 1 Tbsp filtered water
To make the pizza crust, combine the flour, guar gum and sea salt in a bowl, and whisk until well blended. Add the water, and mix in until you have a soft dough.
Turn out onto a sheet of parchment paper with a light dusting of flour, and roll out into a 14 inch circle. Set aside.

Pre-heat the oven to 400F degrees. Set a pan on the center rack with an upside down sheet pan, or a pizza stone set on it. Brush the crust with olive oil, sprinkle with sea salt, and slide the parchment with the crust on it onto the stone.
Bake crust for 15 minutes, then remove the crust from the oven (still on the parchment). Spread the spinach artichoke dip over the crust, then top with the artichoke pieces then the cheese, making sure it is all evenly distributed.
Place the pizza in the oven and bake for 20-25 minutes until the cheese is bubbling and starting to brown (keep an eye on it after 15 as some ovens cook faster than others). Remove the pizza and parchment from the oven, slide pizza onto a cutting board or plate, scatter spinach over the top, slice and enjoy!