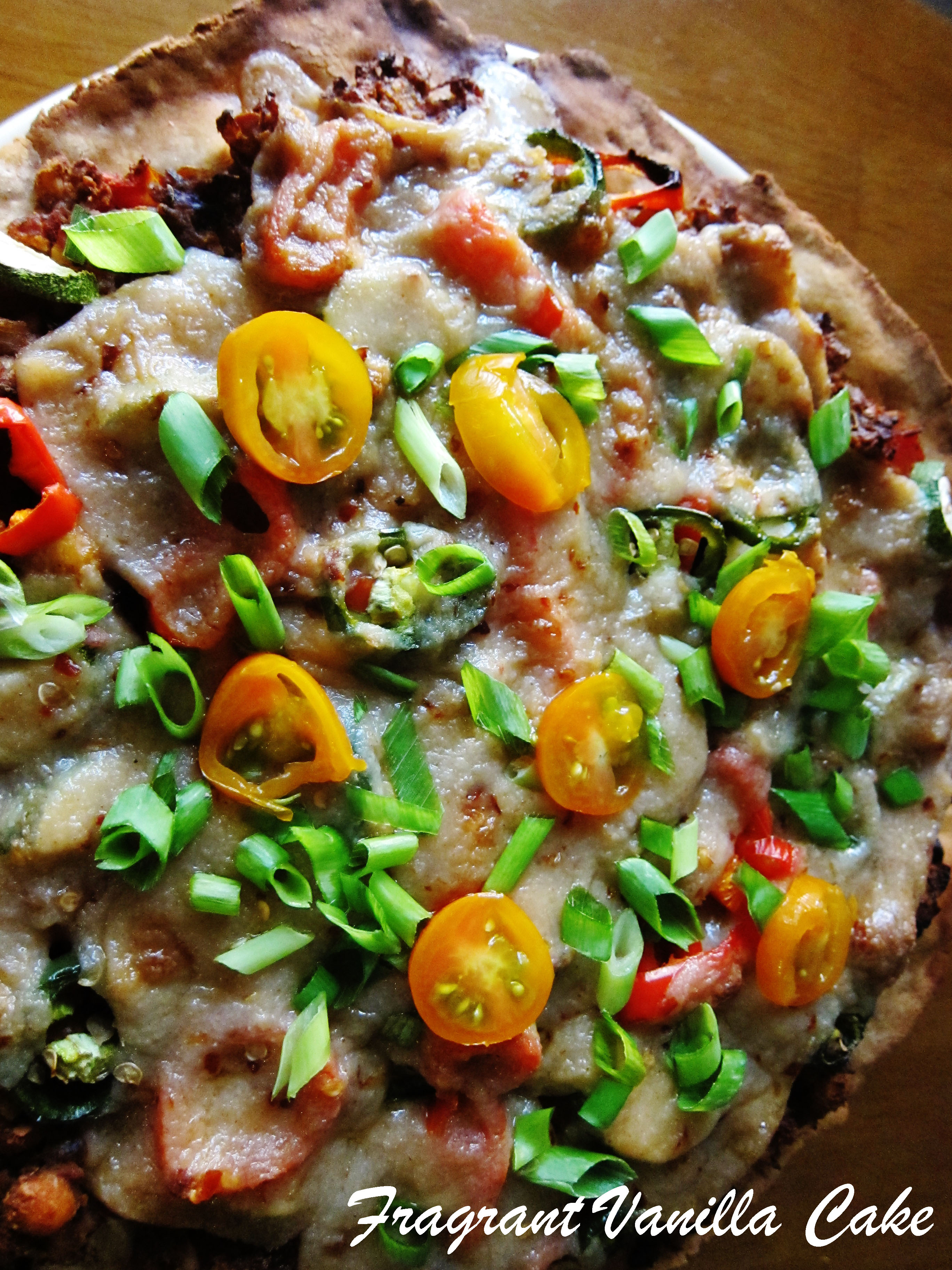 I had made some vegan pepperjack cheese last week, and I used some for quesadillas, but I wanted to make a pizza out of the rest of it.  Some sort of spicy Mexican pizza because I haven't had a pizza like that in a while with melty cheese.  I thought long and hard all day while I was at work about what I wanted to put on it.  First, I thought lentils, but then by the time I got home I didn't even feel like cooking those, so I ended up using the chickpeas I had cooked off in the fridge.  Not just chickpeas though thrown onto the pizza.  That would be boring and not spicy enough. So I made chickpea chorizo.  It was sooo good!  I enjoyed it so much I am going to use it on taco salad in the future.  But anyways, it was wonderful on the pizza. I made a gluten free crust as the base, then scattered the chorizo about. Then I topped it off with veggies as well, some zucchini, peppers, jalapeno, and tomatoes.  Lastly the cheese.  Oooh it melted so perfectly over that pizza! I have never had vegan cheese this good. The pizza was nice and spicy thanks to all the different peppers I used in the chorizo and the jalepenos and the spicy cheese.  But that was what I was going for.  I am a sucker for spicy.  I shared some with Eric, because he shares my love of all things hot.  I am sure he would have loved it even better had I had ghost peppers to put on it.  Anyways, this is delicious! To make the cheese, heat the coconut milk in a saucepan with the garlic and peppers, until it comes to a simmer.

To make the chorizo, heat the oil in a pan, and add the onions.  Cook, stirring often until the onions are very soft and starting to brown. Add the chickpeas, garlic, spices and tomatoes and continue to cook, stirring the whole time to prevent burning.  Mash the chickpeas up with the back of a spoon and cook until heated through and tomatoes have become mush. Set aside.

Pre-heat the oven to 400F degrees.  Set a pan on the center rack with an upside down sheet pan, or a pizza stone set on it. Brush the crust with olive oil, sprinkle with sea salt, and slide the parchment with the crust on it onto the stone.

Bake crust for 10 minutes, then remove the crust from the oven (still on the parchment). Top the crust with the chorizo spreading around evenly. Then the veggies, then the cheese, making sure it is all evenly distributed. Leave a Reply to Hannah | The Swirling Spoon - Cancel reply