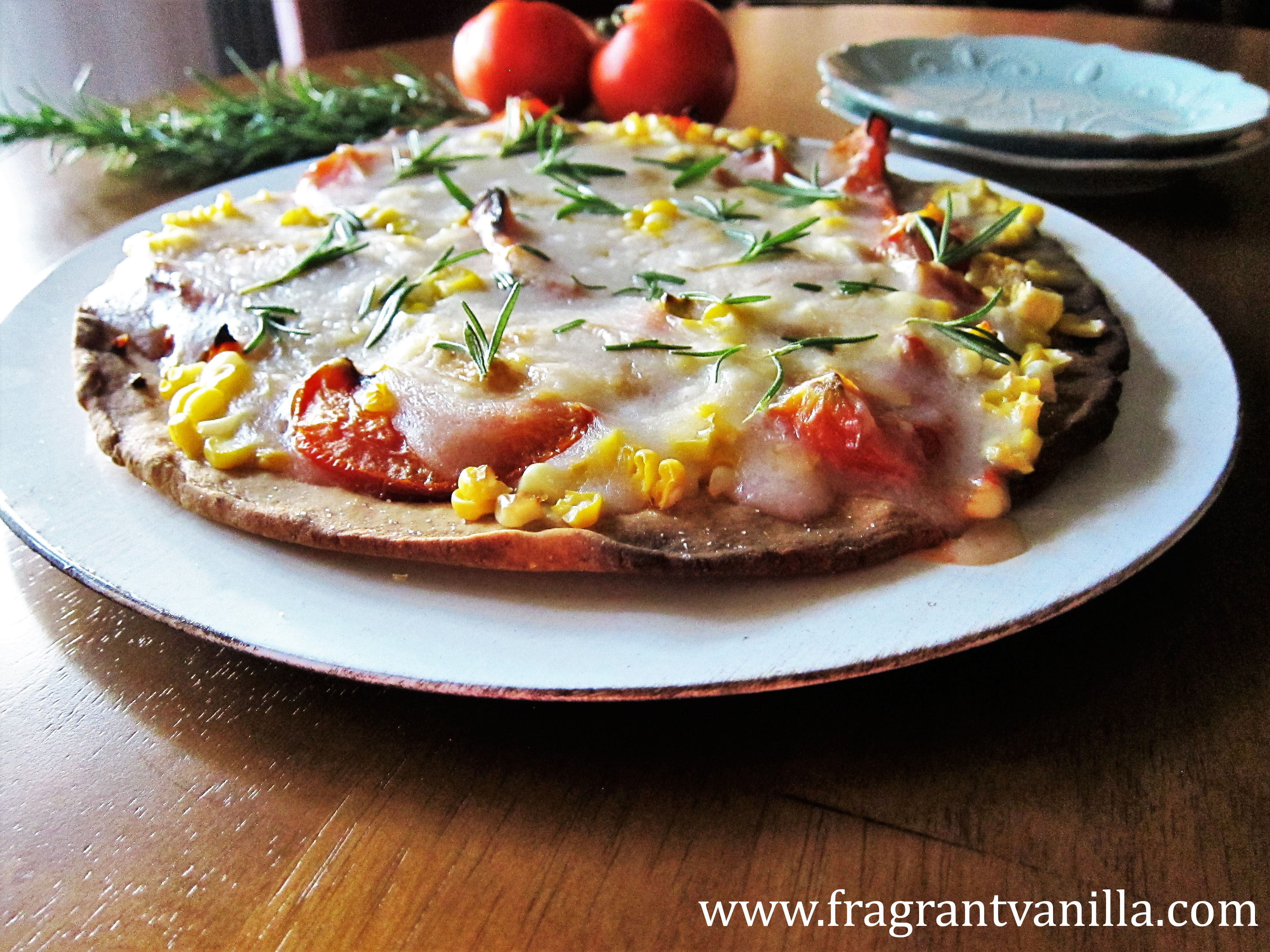 I wish I could have a garden of my own, but unfortunately I can't.  Thankfully I have people who share their garden fresh veggies with me!  My Grandpa does every year, he grows cucumbers and tomatoes, and they are always way better than store bought.  My coworker brought some tomatoes in to work last Friday, and offered them to me and I was like "Heck yes I will take them!" I can never say no to free veggies, and it was very thoughtful of her to share them.  I immediately began thinking about what I wanted to make with them the rest of the day, and I decided on pizza.  Before I went vegan I would make pizza once a week.  Every time trying out new cheeses and toppings.  It kind of went by the wayside, the once a week thing, but I still make them once in a while and the vegan ones are just as good! 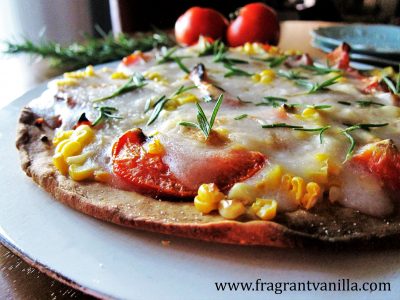 One of my favorites used to be margherita pizza with tomatoes fresh from my Grandpa's garden.  It was so simple to make, but always so good.  Especially good when I took the time to roast the tomatoes before putting them on the pizza.  The flavor gets so intense that way, sweet and savory all at once, the tomatoes sort of jammy.  I decided to make them like that for this pizza as well, although I did not make margherita this time.  I added local sweet corn along with those tomatoes, home made vegan mozzarella, and It topped it off with fresh rosemary.  Which I had also gotten from my coworker.  It all smelled amazing. 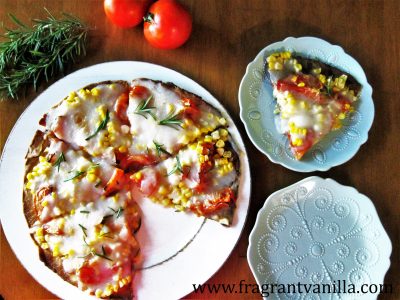 There is nothing like making dinner with veggies that were just picked when it comes to flavor.  This pizza was wonderful.  You know, at one point, I thought I would never enjoy melty cheese again as a vegan (because I don't like most of the store bought ones), so I am really happy that I can and I can make my own delicious pizzas with melty cheese at home.  The omnivores I shared this pizza with approved of it too, which is always good when trying to get people to lean more towards vegan foods.  If you have garden fresh tomatoes and a hankering for pizza, you must try this out! 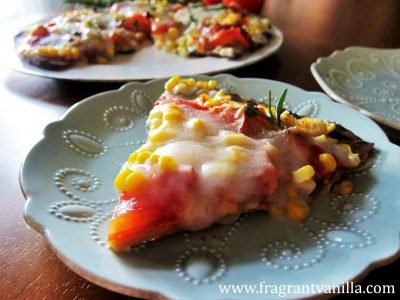 To make the cheese, heat the coconut milk in a saucepan until it comes to a simmer.  Meanwhile, dissolve the arrowroot starch in the water and set aside.Once the coconut milk has come to a simmer, add the agar flakes, and heat until they are dissolved (mine took about 8 minutes, if you are using the powder, it should dissolve within one minute).Next, add the lemon juice and sea salt to the coconut milk.  Mix the coconut oil with the guar gum so that the guar gum does not clump up.  Turn off the heat and add the arrowroot mixture, guar gum and coconut oil. Whisk for about 30 seconds, then pour into a silicone mold (I used a loaf pan, but if you had another shape you would like to use go ahead). Refrigerate for a few hours until firm, then pop out of the mold. You will need half the cheese for this recipe, reserve the other half for another use in the fridge, wrapped in an airtight container.  Shred the half you will be using into a bowl, and keep in the refrigerator until ready to use.

To make the pizza crust, combine the flour, xanthan gum and sea salt in a bowl, and whisk until well blended. Add the oil and water, and mix in until you have a soft dough.  Turn out onto a sheet of parchment paper with a light dusting of flour, and roll out into a 14 inch circle.  Set aside.

Pre-heat the oven to 400F degrees.  Set a pan on the center rack with an upside down sheet pan, or a pizza stone set on it. Brush the crust with olive oil, sprinkle with sea salt, and slide the parchment with the crust on it onto the stone.  Bake crust for 10 minutes, then remove the crust from the oven (still on the parchment). Brush the crust with olive oil, and rub with the garlic cloves. Top with the tomatoes, corn, then the cheese, making sure it is all evenly distributed.  Place the pizza in the oven, turn up the temperature to 475F and bake for 20-25 minutes until the cheese is bubbling and starting to brown (keep an eye on it after 15 as some ovens cook faster than others). Remove the pizza and parchment from the oven, slide pizza onto a cutting board or plate, scatter rosemary over the top, slice and enjoy! 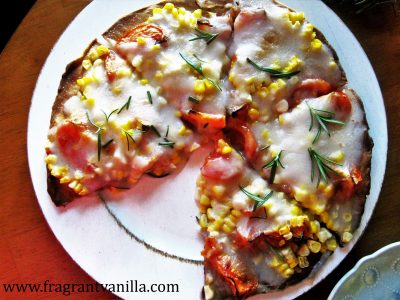