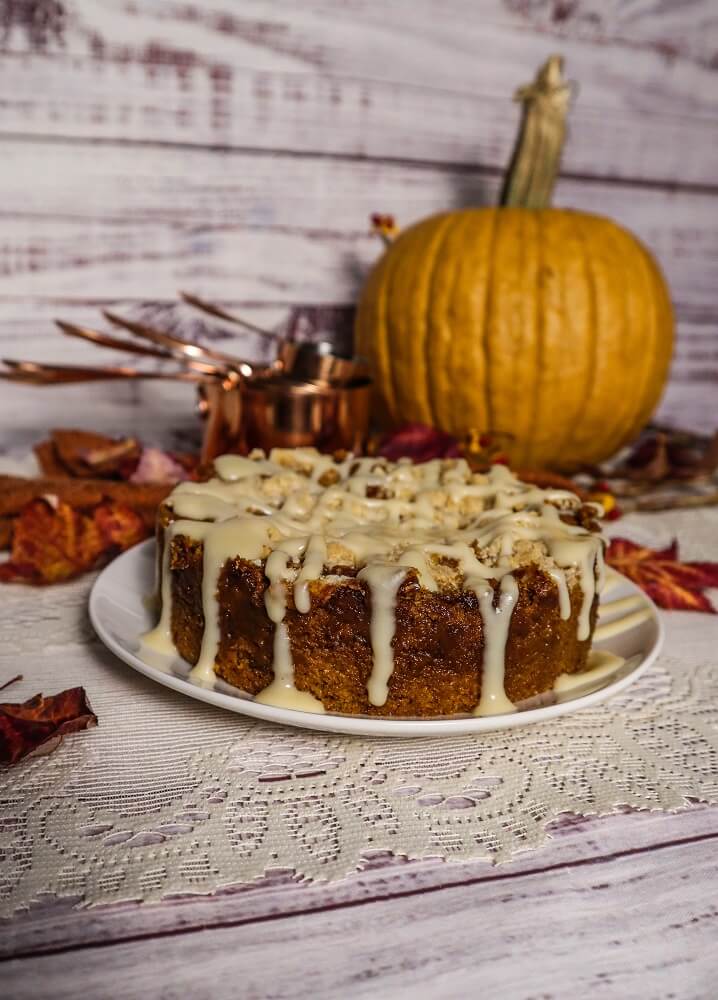 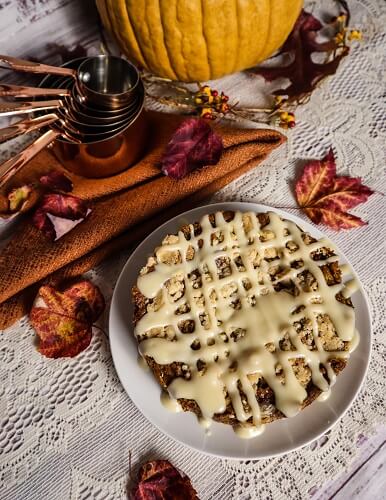 Pumpkin is my jam ever since fall started.  I make so many pumpkin cookies and scones at work lately and they always sell really fast so apparently  I am not the only one.  I have been making cookies, cakes, and pumpkin spice lattes at home, but what I I have really been craving lately that I haven't gotten around to making yet is pumpkin cinnamon rolls.  I have seen a few in my news feed, and wanted to make some last week, but by the time I got home from work it was late and seemed like to lengthy of a process to let them rise and roll them out and whatnot, plus I didn't have any yeast on hand (I thought I still had some), so it seemed like a losing battle to make them, but then I remembered that a while back I made a cinnamon roll cake, that was simple but still had all of the delicious flavor of cinnamon rolls, so I decided to make a pumpkin version, Vegan Pumpkin Cinnamon Roll Cake! 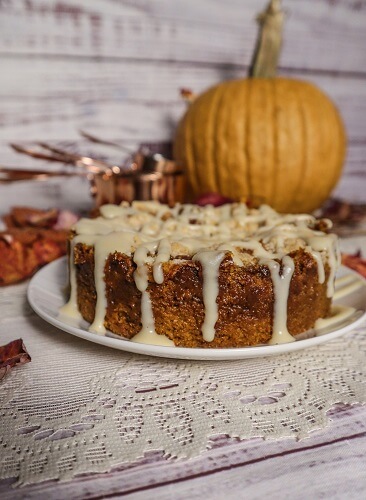 I love changing recipes with the seasons and putting a twist on them! I knew pumpkin spices would be perfect in a cinnamon roll cake (or cinnamon rolls), and I could not wait to whip this up!  For my batter, I based it off of my Cinnamon Roll Cake recipe, but added in plenty of pumpkin puree and pumpkin pie spices instead of the usual cinnamon.  The batter was super delicious!  I always have to sample the batter, ever since I was a kid, it is tradition!  And one time it even saved my cake, because when I tasted it I realized that I had forgotten to add the sugar.  It would have been one disgusting cake if I didn't taste it and add it in before pouring it into the pan.  Don't worry I am not usually that spacey but we all have those days.   This batter was perfect, just the right amount of spices and it is easy to make.  The batter It happens to be oil free, because I use full fat coconut milk in it in place of the oil. 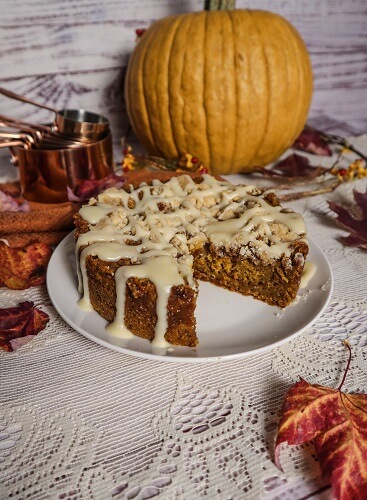 For the swirl, which is essential to cinnamon rolls of course, I used a mixture of sugar, maple syrup and pumpkin pie spices, and spiraled it in the cake to give it a ribbon of sweet spiced goodness! I know cinnamon rolls don't have a streusel topping, but I gave this one just that because I had put one on my other cinnamon roll cake, and this is sort of a mixture between a coffeecake and cinnamon roll.  Plus I think it is so lovely and so delicious!  I love the contrast of the crunch on the soft cake!  This smelled so amazing when I pulled it out of the oven I could not wait to try it! 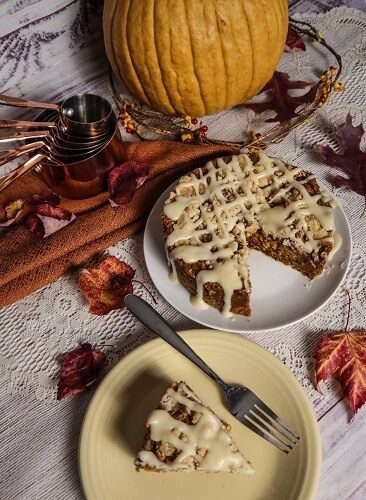 But of course I let it cool first so it could come out of the pan nicely.  I gave it a nice decorative drizzle on top, to make it more reminiscent of cinnamon rolls and it was perfect!  This pairs so well with coffee, it is soft, sweet, scented with pumpkin spices, has a nice sugary crunch on top and you may just have to go back for seconds, just sayin'.  If you have some leftover canned pumpkin this is the perfect use for it!  Maybe I will get around to making real cinnamon rolls soon, but this cake is darn delicious and maybe even better than the rolls, so definitely give it a try! 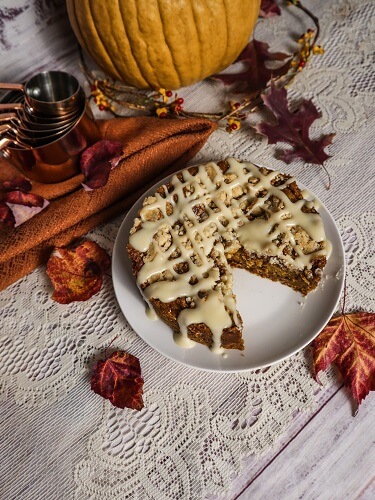