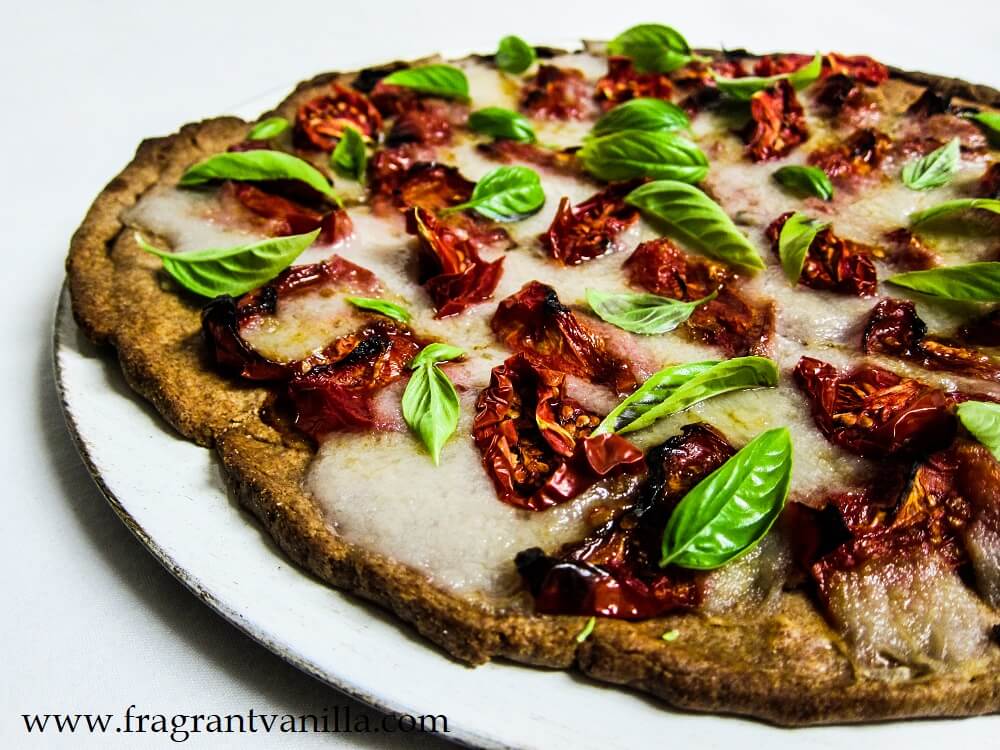 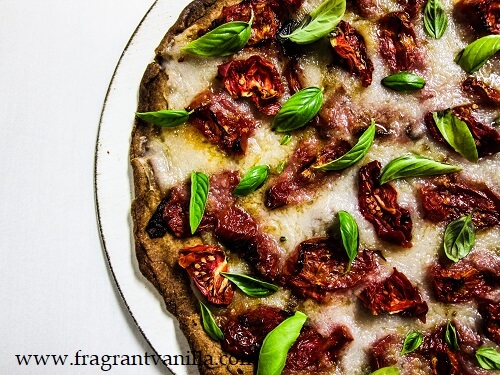 Back when I was in college, I got a pizza stone for Christmas, and I would make some of the best pizza.  Well, I thought it was the best.  Because it had a thin, cracker like crust which is what I prefer, and I topped each pizza with fresh veggies and different types of delicious cheese.  That crust recipe I had found in an Italian cookbook, and I modified it to be just the way I liked it.  I would roll it out super thin so it would be nice and crunchy.  For the toppings, I would use different combinations of fruits and veggies, and I would visit a local cheese shop and choose a different cheese every time.  Although I had a few favorites, the classic margherita was the first one I made and always a favorite in the Summer when I could get local tomatoes.  I thought I would have to say goodbye to this delicious home made pizza when I went vegan, but I was wrong. I have made different types of home made vegan cheeses, and they are always delicious on my pizzas, plus no animals were harmed in the process. I make mozzarella the most, because it is the cheapest to make and the most classic of course for a pizza.  Especially when you are going with the classic margherita with tomatoes, mozzarella and basil.  There is nothing like one of these babies hot from the oven especially when made with fresh picked tomatoes that are super flavorful.  I got my tomatoes from my Grandpa last weekend.  He sent over about 40 lbs, and I have been eating tomatoes at lunch and dinner almost every day.  I am super grateful for them though, because they are so good! 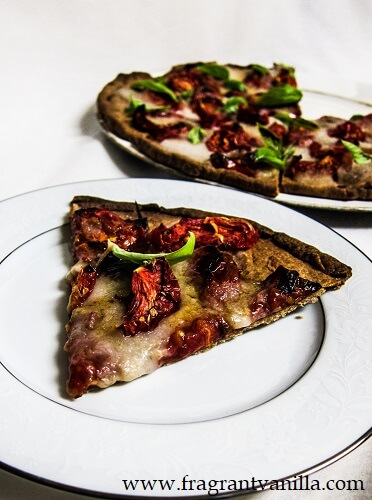 For this pizza I roasted them to intensify the flavor and sort of caramelize them and they were perfect on the pizza! I used a sprouted wheat flour for the crust, because I was given some organic flour, and it worked perfect.  I always used to use whole wheat pastry flour in my crusts when I made them years ago and this tasted just as good.  I was just discussing vegan cheeses with a coworker a few days back and how she thought that they couldn't possibly be good.  Well, I think that this pizza would prove her wrong.  The cheese got nice and melty, and perfect and gooey, and I topped it off with basil and it was so good!  I shared some with my Mom and she enjoyed it as well.  She is not vegan, but she is a fan of the things I make with vegan cheese. If you are craving pizza and have given up on cheese since you went vegan, or maybe you are not vegan yet, and are thinking about going vegan but aren't because you don't think you can give up cheese...either way, definitely try this pizza out! You will find that vegan cheese on pizza can be delicious! 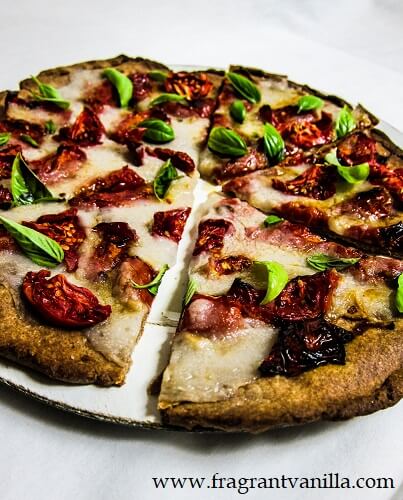 To make the cheese, heat the coconut milk in a saucepan until it comes to a simmer.  Meanwhile, dissolve the arrowroot starch in the water and set aside.Once the coconut milk has come to a simmer, add the agar flakes, and heat until they are dissolved (mine took about 8 minutes, if you are using the powder, it should dissolve within one minute). Next, add the lemon juice and sea salt to the coconut milk.  Mix the coconut oil with the guar gum so that the guar gum does not clump up.  Turn off the heat and add the arrowroot mixture, guar gum and coconut oil. Whisk for about 30 seconds, then pour into a silicone mold (I used a loaf pan, but if you had another shape you would like to use go ahead). Refrigerate for a few hours until firm, then pop out of the mold. You will need half the cheese for this recipe, reserve the other half for another use in the fridge, wrapped in an airtight container.  Shred the half you will be using into a bowl, and keep in the refrigerator until ready to use.

To make the pizza crust, combine the flour, and sea salt in a bowl, and whisk until well blended. Add the oil and water, and mix in until you have a soft dough.  Turn out onto a sheet of parchment paper with a light dusting of flour, and roll out into a 14 inch circle.  Set aside.

Pre-heat the oven to 400F degrees.  Set a pan on the center rack with an upside down sheet pan, or a pizza stone set on it. Brush the crust with olive oil, sprinkle with sea salt, and slide the parchment with the crust on it onto the stone.  Bake crust for 10 minutes, then remove the crust from the oven (still on the parchment). Brush the crust with olive oil, and rub with the garlic cloves. Top with the tomatoes, then the cheese, making sure it is all evenly distributed.  Place the pizza in the oven, turn up the temperature to 475F and bake for 20-25 minutes until the cheese is bubbling and starting to brown (keep an eye on it after 15 as some ovens cook faster than others). Remove the pizza and parchment from the oven, slide pizza onto a cutting board or plate, scatter basil over the top, slice and enjoy!