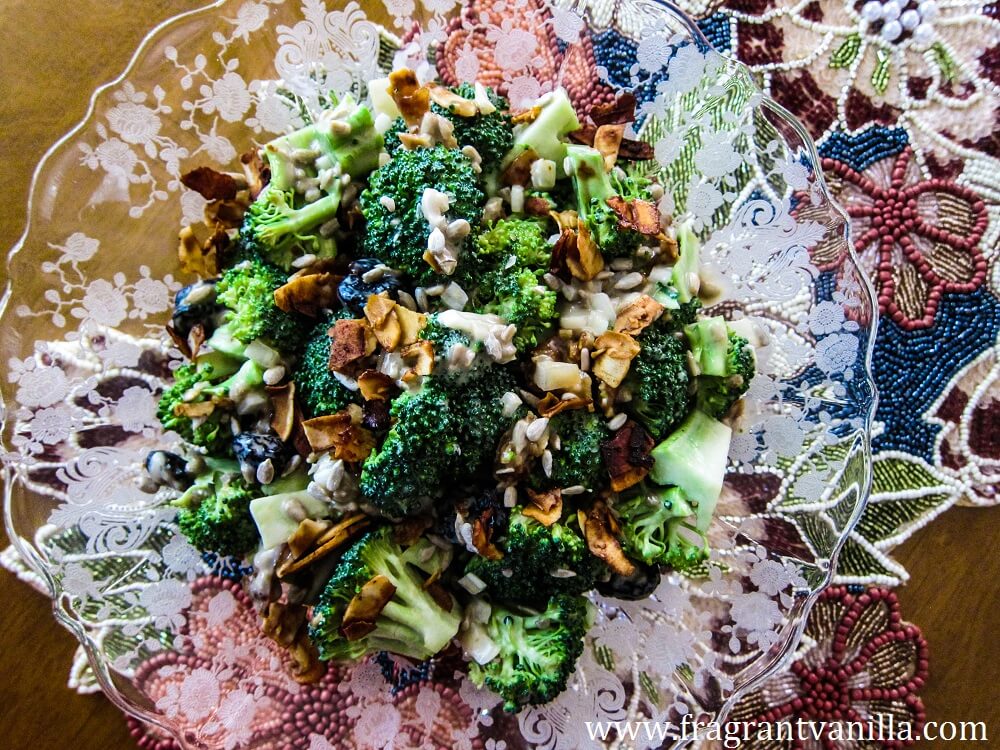 There is a broccoli bacon salad that is very popular among Minnesotans at church potlucks or summer picnics.  It has a creamy dressing, raisins, sunflower seeds, onions and sometimes cheese depending on who makes it.  I used to like it when I was little because it was sweet and had bacon, but when I got older it was too sweet for me, as it is usually loaded up with sugar and mayonnaise two things I am not a fan of not to mention the bacon which I haven't eaten since I went vegetarian in 2003 (I have been vegan 5 years).  One of my friends jokingly used to call it "broccoli barf"  because she was a vegetarian too and thought it was too sugary and mayo filled as well.  We actually make a version of this in the deli I work at and it is pretty popular.  Which got me to thinking, why couldn't I make a vegan version of it that I could actually eat, and tailor it to my tastes so I would enjoy it as well? 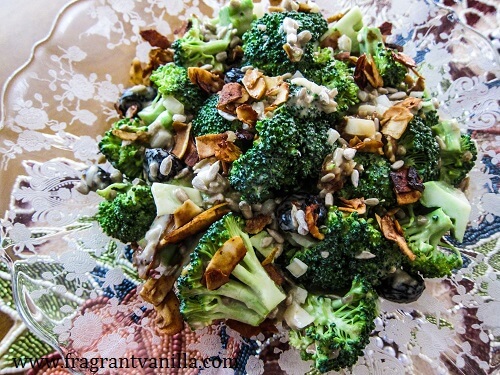 I admit I don't usually reach for the broccoli first, but I really wanted to make a good vegan version of this!  I mean, yes, I could have made it really simple and bought vegan bacon and vegan mayonnaise, but were is the fun in that?  And, I don't usually like store bought mayonnaise even if it is vegan.  So, I made my own creamy sweet dressing that ended up tasting even better than the mayo one.  It had a coconut milk cashew base made a little tangy with cider vinegar and sweet with maple syrup.  It was delicious once poured over the salad. 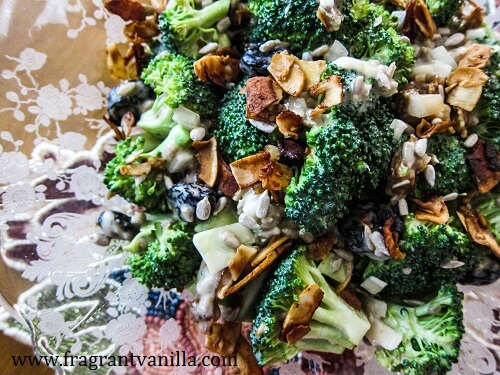 For the bacon, I made coconut bacon.  It is now my favorite vegan bacon for when I want to sprinkle it on top of something or just snack on it.  It is honestly the closest thing texture and flavor wise I have found to real bacon.  It was super delicious in the salad and added a nice crunch.  I kept it classic with onions and sunflower seeds, but I swapped out the raisins for dried cherries because I am not a huge raisin fan and that was what I happened to have on hand.  I shared some of this salad with my Mom, who has tried the original version probably way more times than me and is usually not a fan, but she loved the vegan version I made.  If you are looking for a dish to bring to a Summer picnic or potluck, give this a try! 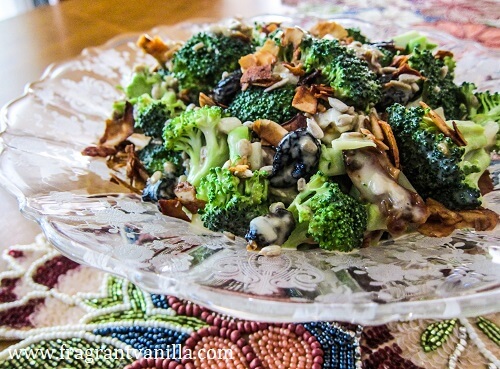 *Note: If you are not serving this right away, do not add the coconut bacon until you are just about to serve it so that it stays crisp.