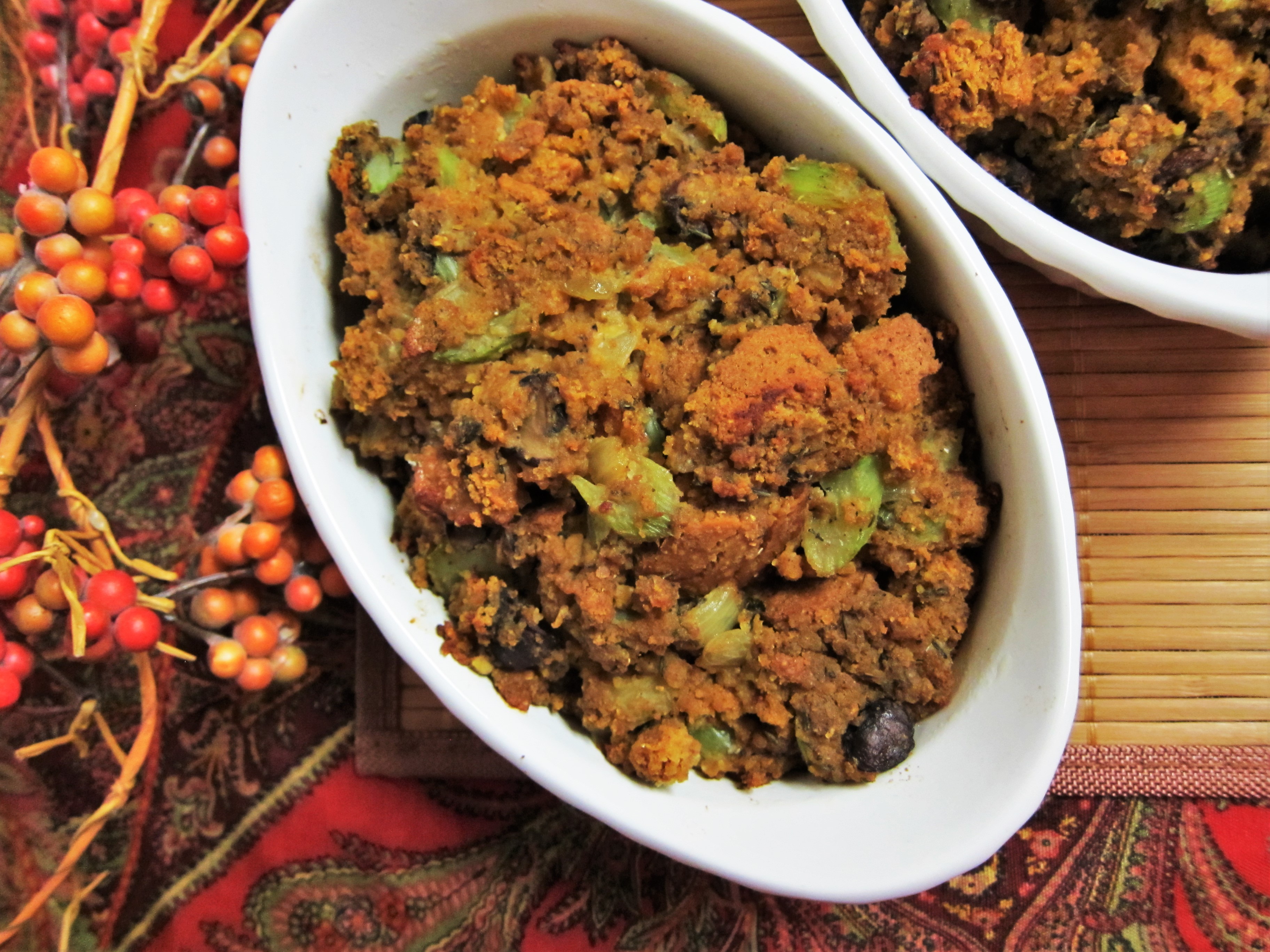 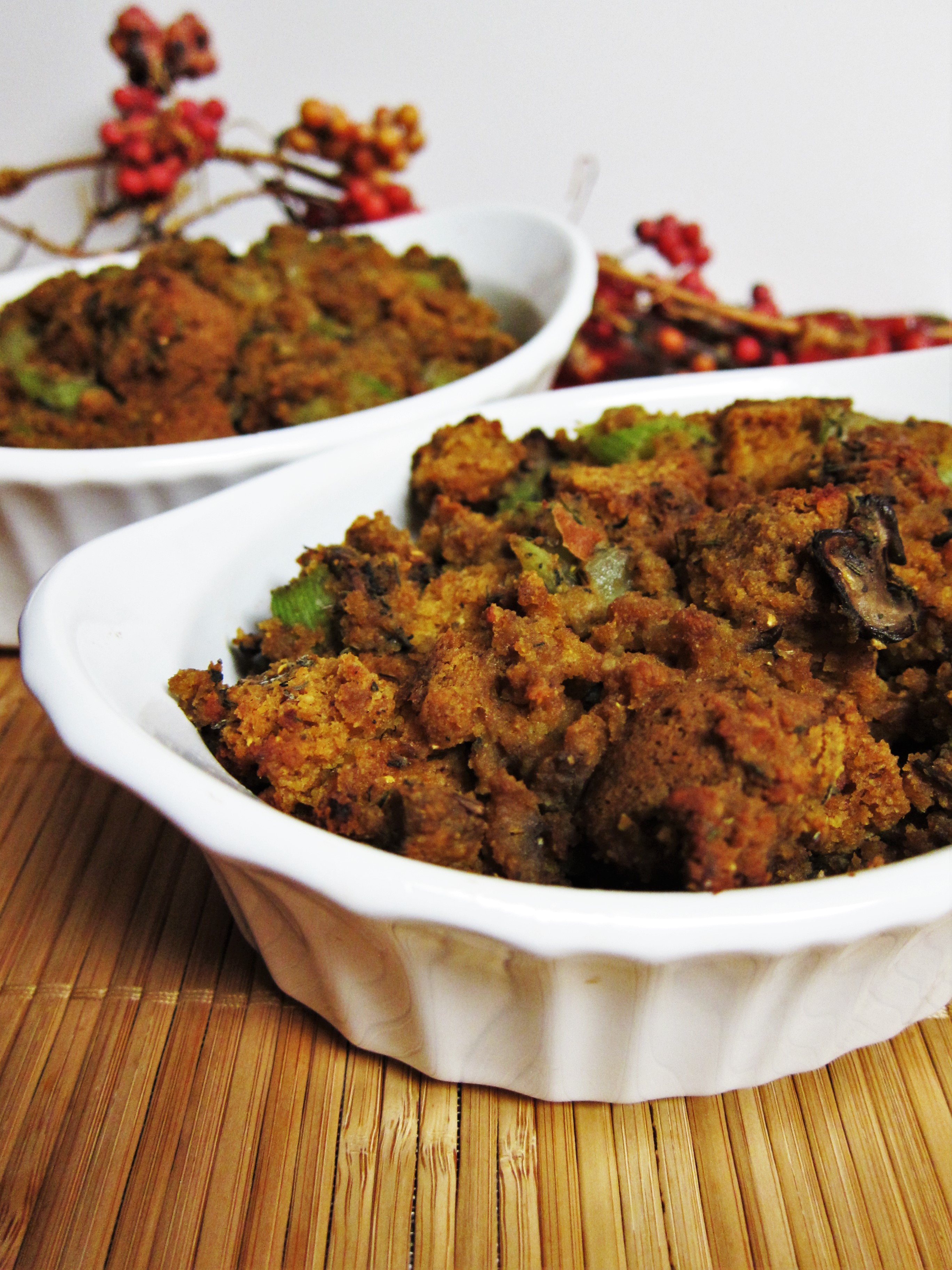 I have made lots of traditional Thanksgiving foods in the past, but oddly enough, I have never actually made stuffing. Which is kind of weird since I did love my Grandmother's stuffing, and it was one of my favorite things at Thanksgiving.  So, this year I decided to make some.  I am really not a big bread person, but when I do eat bread 99% of the time it is home made.  I wanted a gluten free bread for this, and I decided on cornbread since it is a quick-bread and fast to make. My favorite cornbread recipe is actually a squash cornbread.  It is lower in fat than most, and it makes a perfect partner for chili.  So I used that recipe for this. 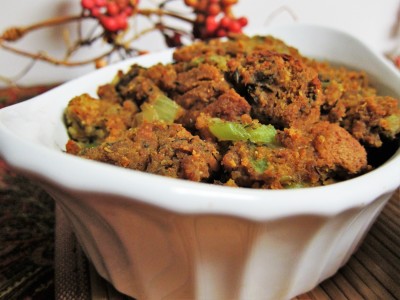 I added in the usual suspects, celery, onions, and garlic, and mushrooms to give it an earthy flavor.  Thyme, rosemary, and sage of course had to be present, and I used my own flavorful home made veggie stock.  When I make my stock, it has lots of onions and garlic, and a bit of celery...so good.  I work in a deli so I have lots of veggie trimmings to use in stock.  Anyways, once this stuffing was all baked into delicious goodness I could not wait to try it.  It smelled amazing.  I like the contrast of the crisp bits on top with the soft stuffing beneath.  Crave worthy.  I think this would have passed Grandma's taste test.  It was delicious! 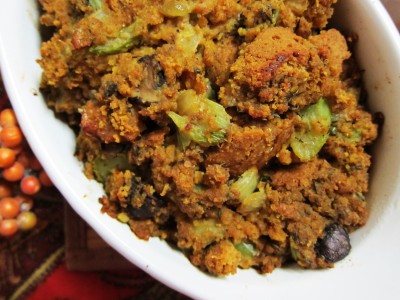 Pre-heat the oven to 400F degrees.  Spread the bread cubes out on a sheet pan, and toast in the oven for about 10 minutes until a little dry.  Remove from the oven and set aside in a large bowl.

Meanwhile, in a skillet over medium heat, heat the olive oil, and add the celery, onions, and mushrooms.  Sautee until tender, about 10 minutes, then add the garlic and herbs and sautee a minute more.  Add 1 cup of the stock to deglaze and scrape up any brown bits. Pour this mixture over the bread in the bowl, and toss gently to mix together. Pour into an 8 inch square oiled baking dish.  Drizzle the top with a little olive oil (optional, if you are toasting the top). Place in the oven, cover,  and bake for about 30 minutes until heated through, removing the foil for the last 10 minutes if you want to brown the top and get it crispy.  Serve warm.

Preheat the oven to 375 degrees. Oil an 8x4 inch pan with coconut oil. In a large bowl, whisk together cornmeal, flour, baking soda, baking powder, sea salt. Whisk in coconut milk, squash, coconut oil, and maple syrup until well combined. Whisk in cider vinegar quickly until just combined, then pour into prepared pan. Bake for 15-20 minutes until lightly golden on top and a toothpick inserted into the center comes out clean. Cool a few minutes before turning out from pans.