Home Puddings,Custards and Parfaits Vegan Yogurt Cheesecake in a Jar 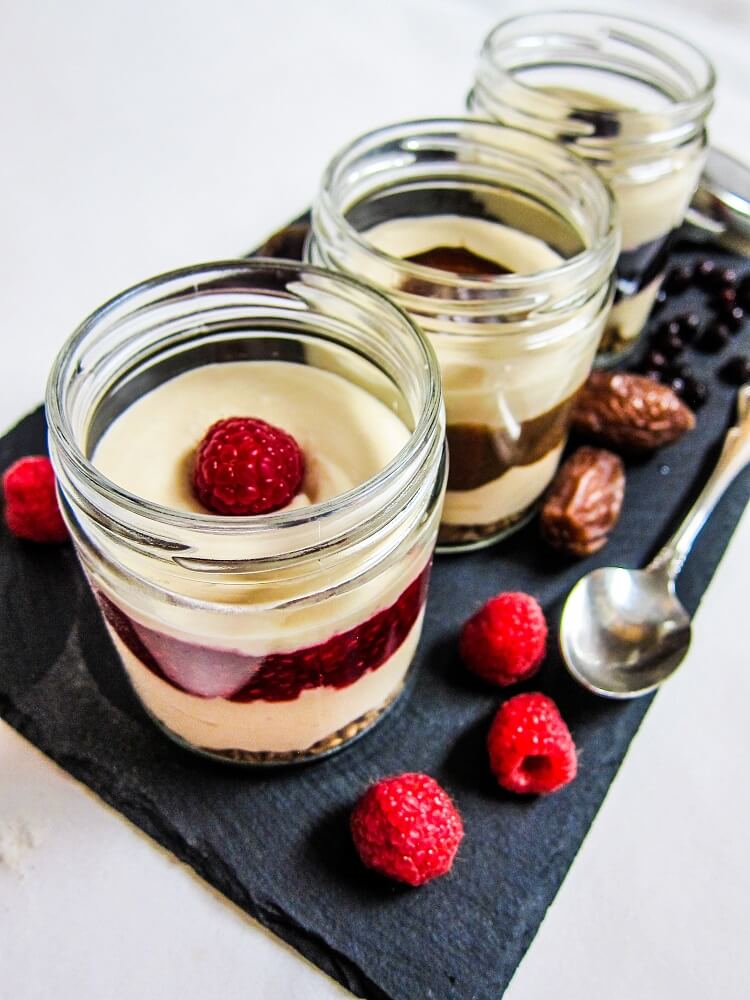 Cheesecake is my favorite dessert. It was even before I went vegan. I thought I would never enjoy it again when I had to give up dairy, but boy was I wrong! Vegan cheesecakes are even more delicious than their dairy cousins if you ask me. In fact, it was a raw cheesecake that made me decide to take the plunge and go vegan 7 years ago. I tried it and it was so good, I decided that if I could still enjoy delicious goodies like cheesecake as a vegan it would not be bad after all! I don't even miss any non-vegan items now.

Sometimes I want cheesecake, but I don't want to make a whole big giant one just for myself and my boyfriend Eric so I make smaller ones. But last week, I had made some vanilla coconut yogurt using some vanilla Sunbiotics probiotics powder from Raw Guru and I decided that it would be amazing in some mini cheesecakes. I decided to do something I haven't done before and made cheesecakes in a jar. Why not? They are portable, so if you want to bring a treat to go with your lunch, or save it for later, just screw the top on!

Once the coconut yogurt is made, these are really easy to whip up fast. The yogurt is an overnight process, but it really is worth it, and that probiotic powder gives it the perfect tang! I try to get in a daily dose of gut healthy probiotics so I love that I can include it in dessert. I wanted these to be simple and easy so for the crust, I used some home made vanilla granola I already had on hand. You could use store bought though if you wanted.

I made 3 different fillings, because variety is the spice of life! But of course you could just pick one (the filling recipes below are for 3 jars). I made strawberry, blueberry and caramel and they were all super delicious! This is not a super stiff dense cheesecake, it is more light and creamy like a cheesecake yogurt mousse which is how I wanted it. These are crave worthy! If you are a cheesecake fan, give these a try!

*Date Paste: Blend 1 ¼ cups pitted soft medjool dates (if they are not soft, soak them in filtered water for 30 minutes and drain) and 2/3 cup filtered water in a blender until smooth.  Store in a jar in the refrigerator up to 1 week.  This can be used in recipes instead of other liquid sweeteners such as maple syrup or coconut nectar.