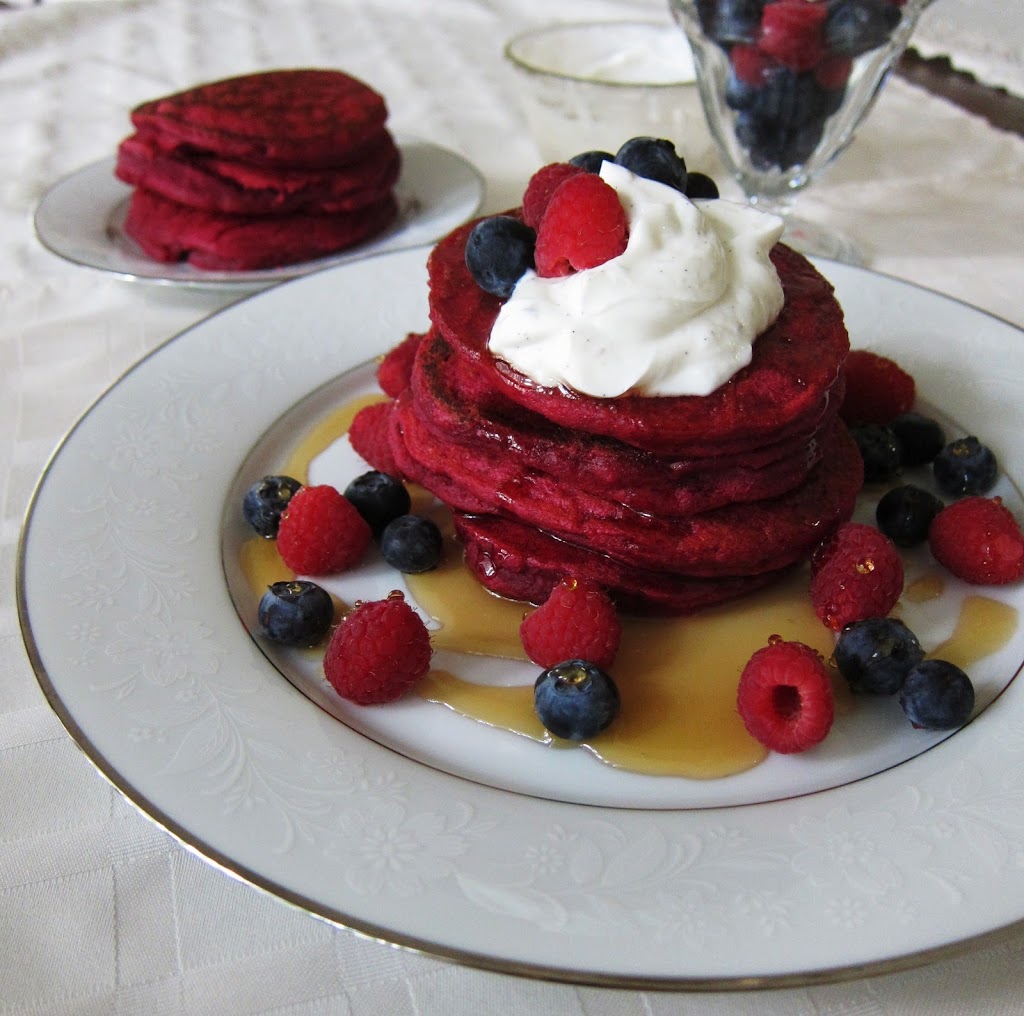 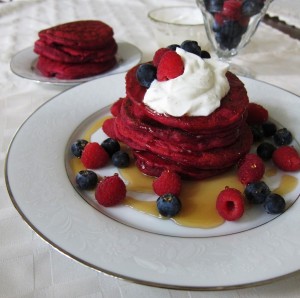 Earlier this week in the deli where I work, an adorable little girl in a pink dress was peering into the salad case.  She got a big smile on her face, started clapping and yelled "Yay!!!"  I couldn't imagine what a five year old would be so excited about in the salad case...but then her Mother, who was standing behind her said "She is exited about the beet salad.  She loves beets."  It was about the cutest thing ever.  A child getting excited about veggies, even better that it was beets!  It was a really beautiful delicious beet salad she was exicted about that my friend Gabrielle made which she was excited about though, so I don't blame her.   But still, I wouldn't have touched a beet with a ten foot pole when I was five, so it made my day to hear her get excited about the beets!  Thank goodness as an adult I can't get enough of beets and I don't hold a grudge against any veggies. 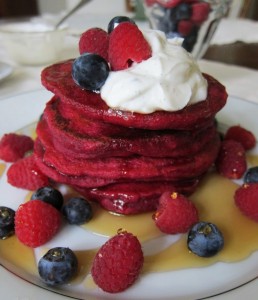 If you read my blog frequently, you know that it is no secret I love beets and I love to include them in everything including desserts.  So when I decided that making a batch of red velvet pancakes the other day seemed like a good idea, you know where my food coloring was going to come from.  Beets of course, since I am not a fan of fake red food coloring.  And why use it when you can use nutrition packed beets? 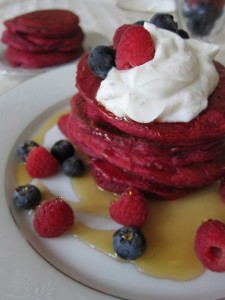 I didn't exactly have a recipe, but what I did was use a simple vegan banana pancake recipe I have been making for a long time, swapping out the bananas for beets figuring they have a similar texture.  It worked wonderfully! 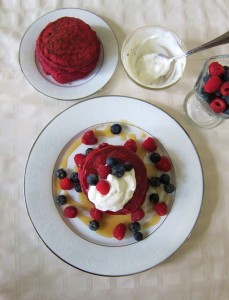 I served the pancakes with whipped coconut cream and fresh berries.  They were beautiful, and they were delicious!  You would have never known they had beets in the by the taste, but it made me happy to know they were there. 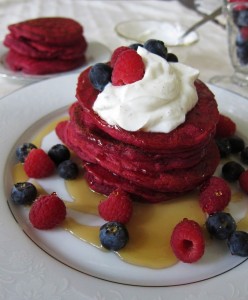 In a food processor, combine all pancake ingredients and process until just blended, pour into a bowl and set aside.
To make coconut cream, chill a medium bowl and beaters in the freezer until very cold. Place coconut milk in the chilled bowl and beat until stiff peaks, about 1-2 minutes. Add syrup and vanilla and beat until combined. Set aside in the fridge to keep cold.
To cook pancakes, preheat oven to 200 degrees.  Heat a large non-stick pan over medium heat and add a little coconut oil to coat the bottom.  Once hot, add the batter in 1/4 cup amounts (I did 3 at a time, but it depends on your pan), and let cook for about 2-3 minutes on the first side until set and starting to brown, then flip with a spatula and cook another 2-3 minutes on the other side.  When cooked, place on a plate and keep warm in the oven while you repeat the process with the remaining pancakes.
To serve, top with the coconut cream, fresh berries and maple syrup if desired!
*About one large beet, I cooked mine by wrapping it in foil and roasting it in a 450 degree oven until tender (about an hour and 15 minutes).  I then let it cool and peeled it, cut it into chunks and pureed it.