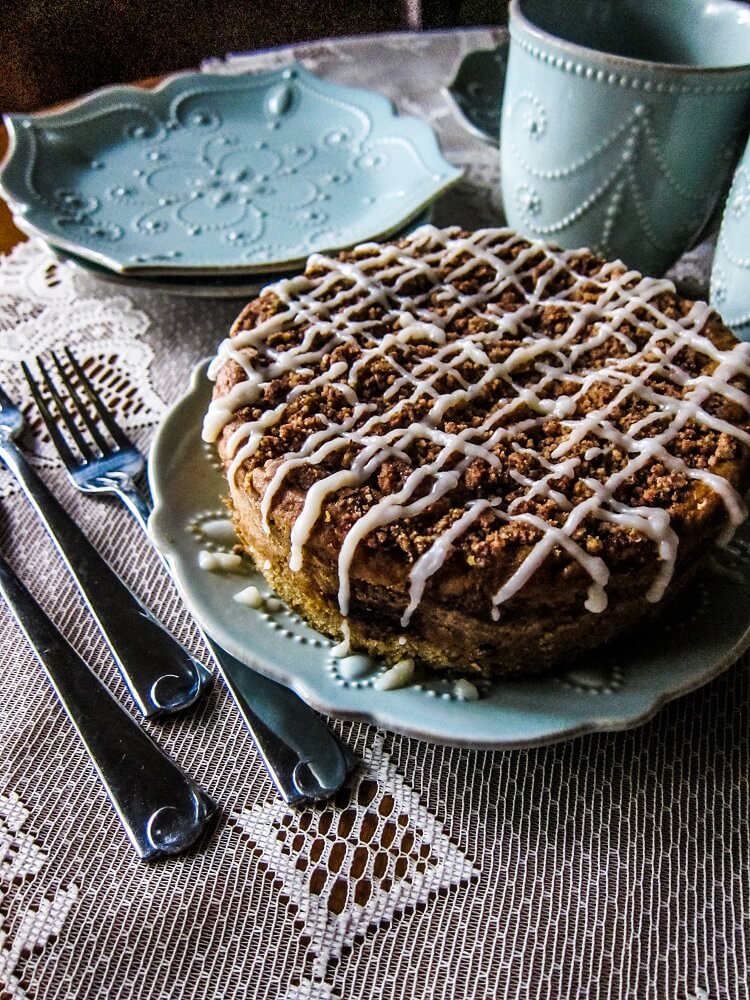 At work in the deli last week, one of my coworkers decided to bake a cinnamon roll cake for our hot food bar.  We don't usually make desserts for it but it is always nice to swap things up, and a lot of people have a sweet tooth.  Plus, who doesn't like warm cinnamon scented cake? Anyways, the cake smelled amazing and sold well but sadly it wasn't vegan so I could not try it.  So I decided that I was going to go home and make one of my own that was more suited to my tastes as well.  I prefer to make my desserts a bit less processed than traditional ones, so every time I veganize a recipe it becomes less processed as well. I was super excited about this one! I already love cinnamon rolls, but they are kind of a lot of work.  Cake is so much easier! And if I can get the same sweet cinnamony flavor, why not?!  For the cake base I started off with what I would use for my plain vanilla cake.  Cinnamon rolls have a vanilla base after all.  It was really quite simple to make, just whisked all together in a bowl!  Back in the day before I went vegan and I would make those vanilla cakes that you had to whip the eggs separately and cream the sugar and whatnot and you know what?  Honestly the texture of my vegan cakes is just as good and they are easier to make.  I used maple sugar to sweeten this one, because it goes so well with cinnamon.  Also, you may notice there is not any oil in this cake.  It actually doesn't need it, because the coconut oil I use in the batter is plenty rich! I gave the inside of the cake cinnamon swirls as well, because cinnamon rolls have to have plenty of cinnamon!  I did swirls instead of just dropping it in because I figured it would be more evenly distributed that way.  Once it was all put together I wanted to make a streusel for the top like the one that was made at work.  I am a sucker for streusel after all.  I love it on anything dessert related.  I kept this one simple, just flour, sugar and coconut butter (not to be confused with coconut oil) plus some cinnamon and was looking forward to how crunchy and delicious it would get once baked! It smelled amazing while baking by the way.  Cinnamon reminds me of fall, which is appropriate since we are almost there!  I could not wait to try it, but I had to wait for it to cool a bit before un-molding.  As if it wasn't already amazing how it was, I added some glaze like the cake at work had.  Except instead of making a powdered sugar glaze, I used coconut butter sweetened with a bit of maple syrup.  It was time to dive in.  The cake was soooo good!  It had a soft, light texture, and it was just the right amount of sweetness, with the perfect amount of cinnamon and vanilla.  That crunchy struesel topping made it crave worthy!  So the next time you are craving cinnamon rolls but don't want to deal with yeast and kneading and whatnot, make this instead!