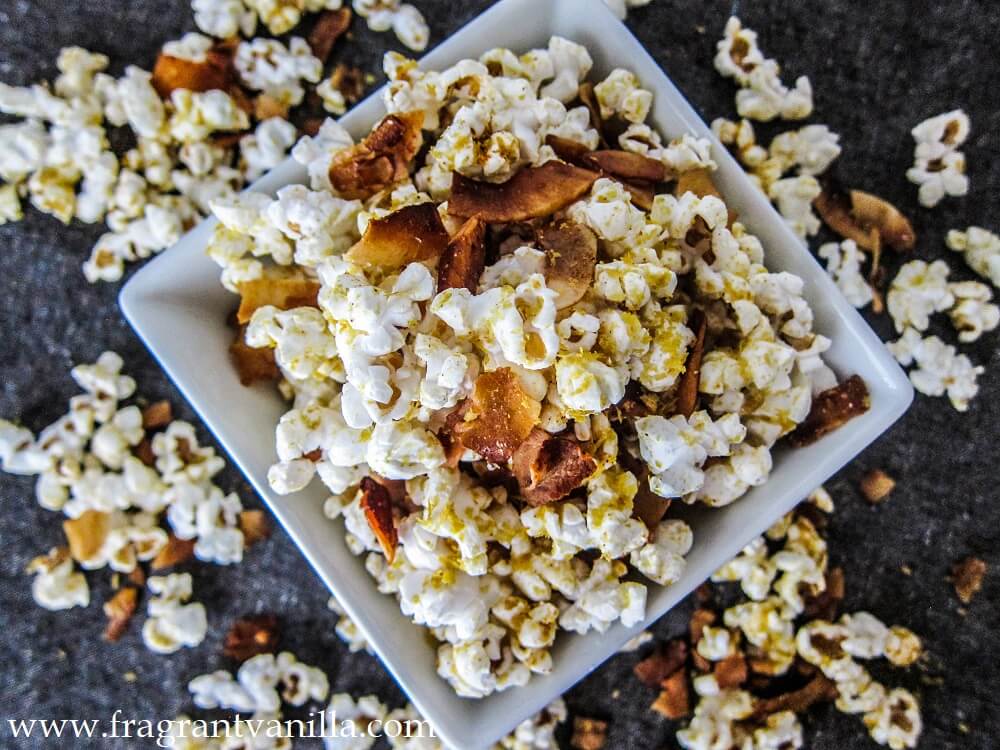 Do you ever go to clean out your cupboards, and end up dumping something on yourself that was pushed way into the back in the highest one?  Something like lentils or say, popcorn kernels that end up spilling and bouncing off of the counter and yourself with little pings like rain drops and landing in every nook and cranny?  Well, that was me the other night.  It never fails, it has happened multiple times.  But this time it was popcorn and it was a mess.  But on the bright side, it gave me the idea to make some.  Because I had forgotten that I had it!  But what kind to make?!  I didn't want to be boring and just make plain with sea salt.  Although that is needed sometimes, and it is healthy...but I wanted something more.  I cruised Pinterest for ideas, and finally ruled out the sweet because I was in a savory sort of mood.  I ended up deciding on cheddar bacon popcorn inspired by a parmesan bacon popcorn.  But vegan of course, because eating animal flesh or taking milk from cow babies is sad and unnecessary. This was going to be good. 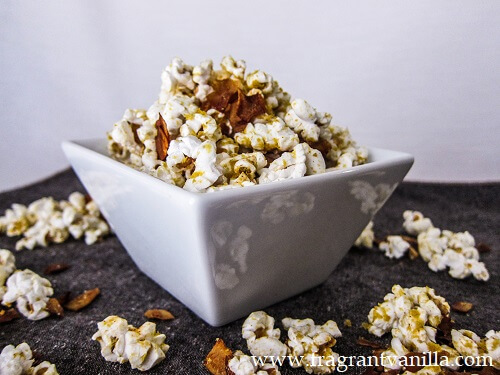 I have been putting nooch (nutritional yeast) on my popcorn forever as a sort of a vegan cheese like popcorn and it is always so good.  It reminds me of the cheese flavored popcorn that I had as a kid.  I loved that stuff.  I could sit and eat a large bag and I would be happy.  You know the kind, that stains your hands orange like Cheetos. Really not good for you, and I am sure it is not even real cheese.  But I was happy to discover nutritional yeast to replace it for a healthier version, I have been doing this since even before I went vegan. So that is what I used for the cheesy flavor in this popcorn.  I used some avocado oil to adhere the cheese to the popcorn, since it has sort of a neutral buttery flavor and it worked perfect!  I also added in some garlic powder, chipotle powder and sea salt and it was so good! Just good like that, but I didn't stop there. 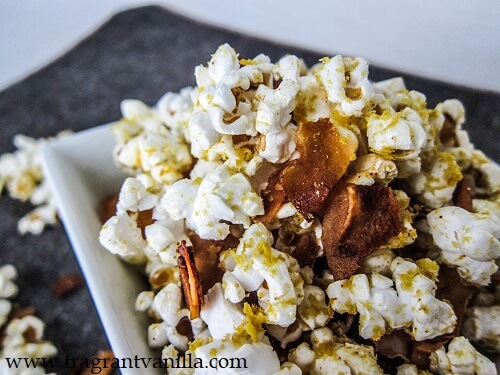 No, I had to go and add coconut bacon as well to make it even more crave worthy!  On a side note, if you have not tried coconut bacon, you simply must. It is amazing game changing stuff.  It is the closest thing I have had to actual bacon crumbles because the texture is nice and crisp and the flavor is smoky, salty and slightly sweet.  I love the stuff.  Crumbled over salads, or even desserts, and of course this popcorn.  Bet you can't have just a few handfuls.  I had a hard time tearing myself away because this is some crave worthy stuff.  If you are in the mood for an amazing salty crunchy snack, you need to try this popcorn! 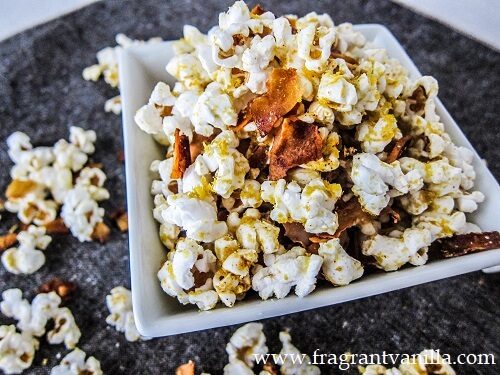