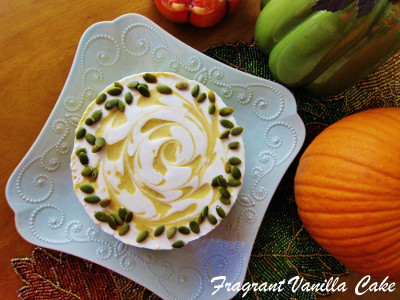 I was hard core craving some pumpkin spice cheesecake last weekend.  But just plain pumpkin spice wasn't going to cut it, I wanted to add white chocolate as well.  oddly enough it has been a while since I made a raw cheesecake since I have been working on my book making other types of cakes.  I used to make one practically every weekend last year!  So, I got back into my groove and whipped this one up. 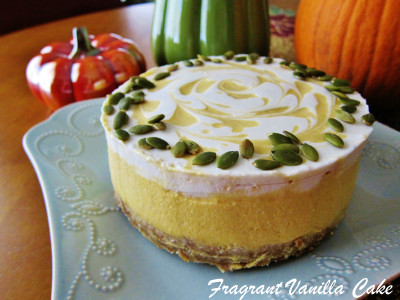 It is actually pretty simple to make, don't let that decorative looking swirl on top fool you.  I used melted cacao butter in place of some of the coconut butter to give it that white chocolate flavor and oh my was it ever heavenly, even before pouring it into the crust. I lightly spiced the pumpkin portion and it was sooo good!  Just a little chill in the freezer and it was all ready. 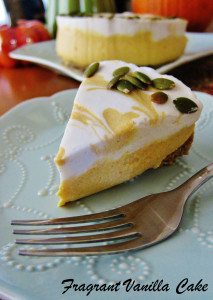 This cake is simply crave worthy.  I think it would be the perfect swap for pumpkin pie at holiday get togethers if you want something a little more interesting.  I have included the recipe for a vegan cake using coconut milk and cooked pumpkin puree if you do not have access to young coconut meat and don't feel like taking apart a pumpkin or squash.  So no excuse not to try this if you don't have young coconuts in your area!  I hope you all are enjoying pumpkin season as much as I am! 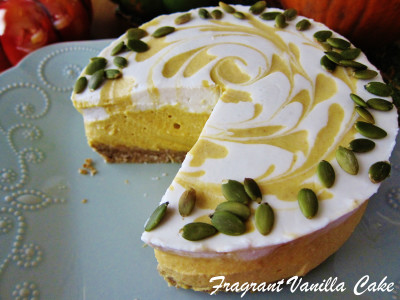 1/8 teaspoon sea salt
1/2 tsp cinnamon
2/3 cup soft medjool dates, pitted and chopped
Filling:
4 cups young coconut meat*
1/2 cup coconut water
1/2 cup raw coconut nectar or your choice of raw liquid sweetener
1/2 teaspoon sea salt
1 Tbsp pure vanilla extract and seeds from half a vanilla bean
1 inch piece fresh ginger
2 tsp cinnamon
1/4 tsp cloves
1/4 tsp nutmeg
1/4 cup raw cacao butter, warmed to liquid
1/4 cup plus 2 Tbsp raw coconut butter (warmed to liquid)
1 cup raw sweet squash such as kabocha or raw carrot**, chopped
Lightly coat a 6 inch spring form removable bottom pan with coconut oil. To prepare the crust, process buckwheat, coconut and sea salt in a food processor until it is fine crumbs, then add the dates and process until the mixture holds together when squeezed between your fingers (if not holding together, add more dates). Firmly press crust into the bottom of the prepared pan, and set aside.
To make the filling, in a food processor combine coconut, coconut water, coconut nectar, sea salt vanilla, and spices and blend until smooth and creamy. With the processor running, add the cacao butter, coconut butter, and process for a minute until blended. Remove the filling from the food processor and divide into 2 bowls. Place one back into the food processor and add the squash.  Blend until smooth then remove from the processor and set aside (if your food processor is not strong enough to make it smooth you may need to strain it through a fine meshed strainer).
Pour the pumpkin filling into the prepared crust, reserving about 3 Tbsp in a bowl.  Pour the plain filling over that, then drop the remaining pumpkin filling by the 1/2 tsp over that and swirl with a knife to create marbling. Place the cake in the freezer for about 4-5 hours until firm.  Store any leftover cake in the refrigerator.

*If you do not have access to young coconut meat, you can substitute 4 cups raw cashews soaked for 4 hours and drained for the coconut and filtered water for the coconut water.

**I use squash or carrot in place of pumpkin in these because it is sweeter and easier to work with and you will never know the difference.  If you wish however you can use pumpkin but you may need to sweeten a little more.

Use crust recipe from raw version

1 cooked pumpkin puree (you may use canned)

Prepare the crust the same as you would for the raw crust version.

Combine the coconut milk, maple syrup, sea salt,  and vanilla in a high speed blender and blend until smooth.

Pour in 1 cup of the coconut butter and the cacao butter with the motor running slowly (so that it does not clump up.  But if it does, just continue to blend until any lumps are gone).  Remove half the mixture, and place in a bowl.

Add the pumpkin and spices to the remaining mixture in the blender, and blend until smooth.  Add the coconut butter in the same manor you added it before.

Place the cake in the freezer for about 4-5 hours until firm.  Store any leftover cake in the refrigerator.

*Note: if your canned pumpkin is especially watery, you may need a few Tbsp more coconut butter.