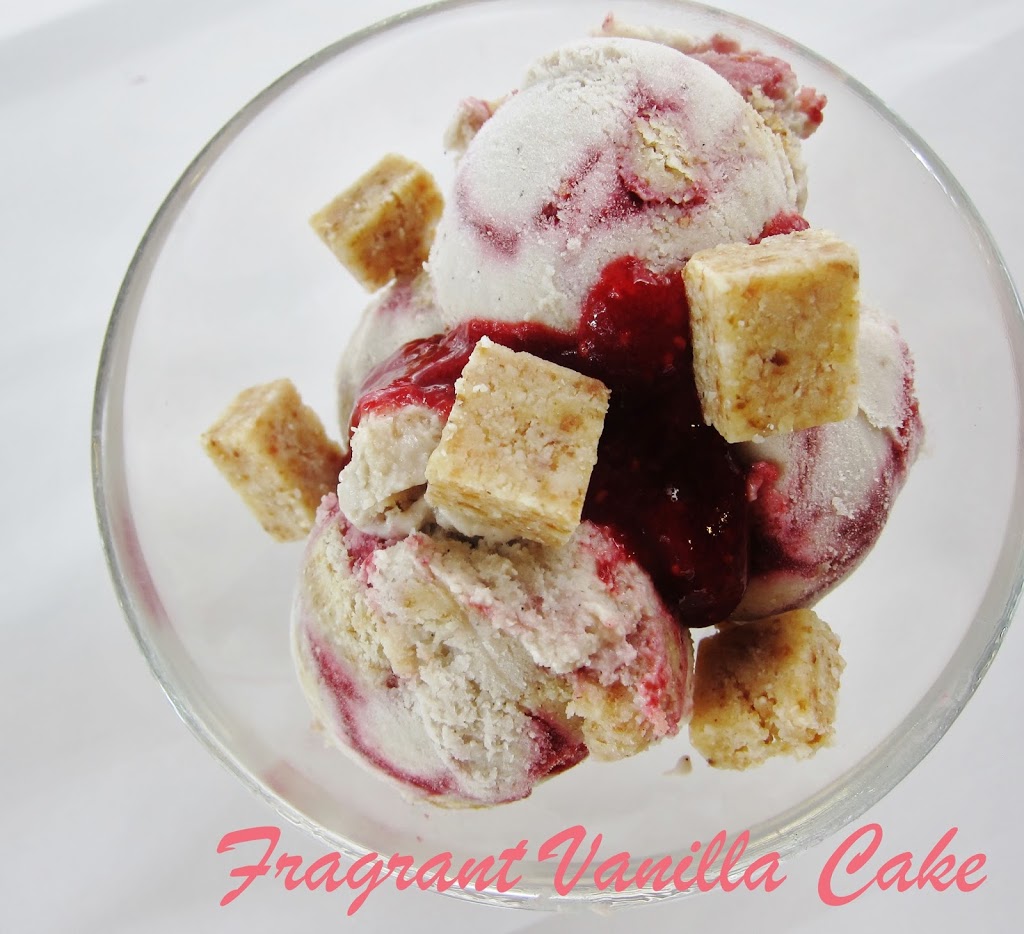 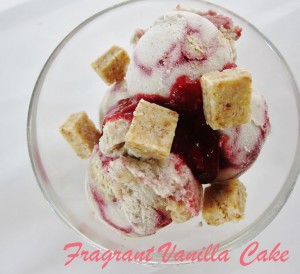 I really am a vanilla cake girl.  Ever since I was little I have always chose vanilla cake with vanilla frosting over chocolate any day.  Some may call it crazy, but it is just who I am.  If I were a cake, I would be vanilla almond cake with raspberry filling and creamy vanilla bean frosting.  It is one of the most heavenly combinations I can think of!  Eventually I will have a recipe for such a cake on this blog, but for today it is an ice cream recipe I am sharing with you. 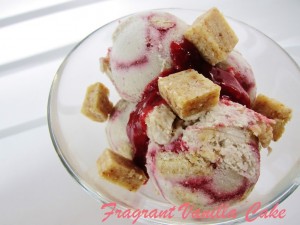 I was making my weekly ice cream and the flavor that came to mind was vanilla cake when I was deciding what type to make.  I imagined a creamy base that tasted like vanilla buttercream, with vanilla almond scented cake chunks, and raspberry swirl.  It was going to be epic! 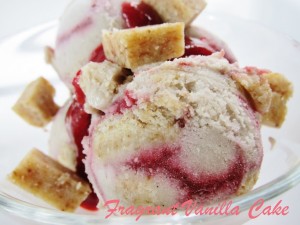 For the base I used coconut and bananas because I am trying to cut back on the nuts lately.  I made a coconut milk, and used fresh coconut for a silky smooth texture and the bananas added some sweetness while making the base a bit lighter (no, it did not taste like banana, it actually tasted like buttercream frosting).    I knew it was all going to be delicious once I had tasted all the components before freezing and assembling it, but it was simply heavenly once it was finished. I shared some with my chocolate loving boyfriend (who would be the one who always picks the chocolate cake over vanilla), and he devoured it in no time.  I myself savored it because it was definitely a happy place ice cream for me.  Who says vanilla is boring?! 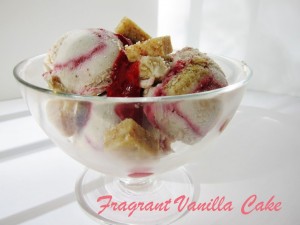 Cake Pieces:
4 soft medjool dates, pitted (if not soft, soak them for 30 minutes in filtered water and drain well)

For the cake, combine the dates, coconut, and almond flour in the food processor and process until well blended and the consistency of flour.  Add the agave nectar, sea salt, and extracts and process until smooth and starting to hold together when squeezed (if it doesn't add a little more agave nectar).  Turn out onto a foil lined sheet pan, and press into a 3/4 inch thick rectangle (rolling with a rolling pin to smooth). Place in the freezer until firm, about 30 minutes. Once firm, cut into 1/2 inch squares.
To make ice cream base, add coconut water to a high speed blender, along with dried coconut and process until smooth to create a thick coconut milk.  Next, add fresh coconut, bananas, agave nectar, vanilla, almond extract, sea salt, and coconut oil and process until very smooth, about a minute or two. Pour the mixture into an ice cream maker and process according to directions.
Meanwhile to make the swirl, combine all ingredients and blend in a food processor until smooth.  Set aside.  When the ice cream is done churning, remove from ice cream maker, stir in cake pieces (reserving some for topping), then pour 1/3 into a freezer safe container with a lid. drizzle 1/3 of the swirl over it, then pour half the remaining ice cream over that.  Drizzle with half the remaining swirl, then top with the remaining ice cream then the remaining swirl.  Place in the freezer and let sit for at least four hours or overnight to firm up to scoopable consistency. 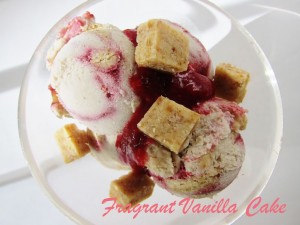