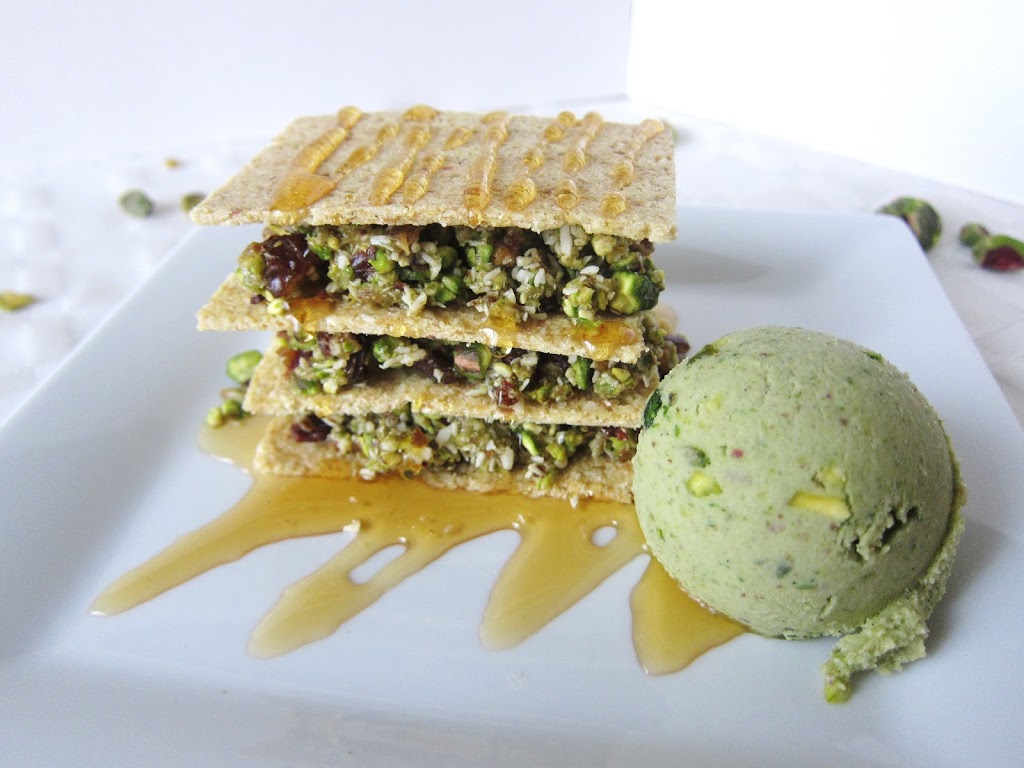 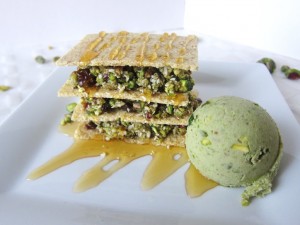 I made raw baklava a couple weeks back, and loved it so much that I decided I needed to make it again.  But me not being one to make the exact same thing twice in a row decided to switch it up a bit.  I had a large bag of pistachios, and I thought they would be lovely in the baklava! 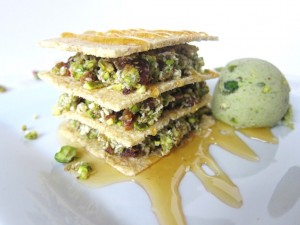 So much more pretty than brown walnuts, which don't get me wrong are delicious, just not as gorgeous as pistachios. To me, pistachios are a bit special.  I remember one time when I needed some for a recipe and I loaded up a large bag of them only to get home, look at my reciept and realize I had just spent over $40 on them.  I have since bought and used them as if they are something precious. 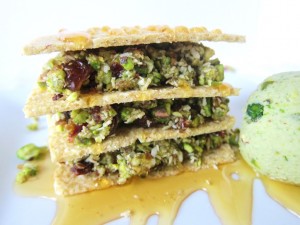 This baklava I was imagining would be something special though, lovely green pistachios, red dried cranberries, and golden sweet honey between wafer thin sweet sheets of "filo dough".  I knew it would be heavenly.  I even decided to make pistachio ice cream to go along side it because I felt that all the crunch needed a creamy accompaniment. 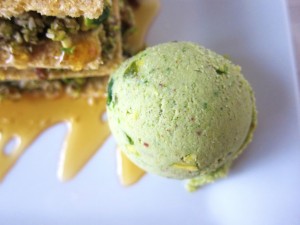 Once all created and assembled, it was a sight to behold, almost too pretty to eat, but who am I kidding...I dove right in and devoured like nobody's buisness! 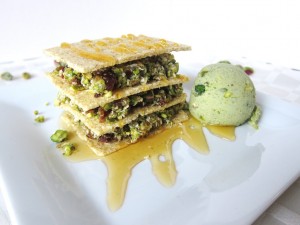 For the "filo sheets", combine the apple, almond meal, sea salt, nectar, and cardamom in a food processor and process until smooth. Spread out thinly onto a teflex lined dehydrator sheet in a large square. Dry for a few hours, or until not tacky anymore, then score into 9 squares. Place back in the dehydrator for about another 6-8 hours or until very crispy. Remove squares (you will have one extra to snack on).
For the filling, combine pistachios, dates, crasins, coconut, and cinnamon and cardamom in a food processor and pulse until well combined but not pureed. You want to have chunks still. Add 2 Tbsp nectar and pulse a few more times. Remove from the food processor.
To assemble, set out 2 plates. Drizzle each with a bit of the nectar. Place one filo square on each, and top with 1/3 of the pistachio mixture (deviding evenly between the two). Top each with another square, then half the remaining filling (deviding evenly between the two). Then another square, then the rest of the filling then another square. Drizzle each baklava with a bit more nectar, and scoop some pistachio ice cream beside each (recipe follows). Enjoy!

Add coconut water to a food processor, along with cashews, 1/2 cup cashews, coconut meat, nectar, vanilla, sea salt and spinach. Process until smooth, then with the processor running, add the coconut oil slowly and process until well incorporated, about a minute. Pour the mixture into an ice cream maker and process according to directions. Remove from ice cream maker, stir in 1 cup chopped pistachios and pour into a freezer safe container. Let chill in the freezer for a few hours until a little more firm before scooping.