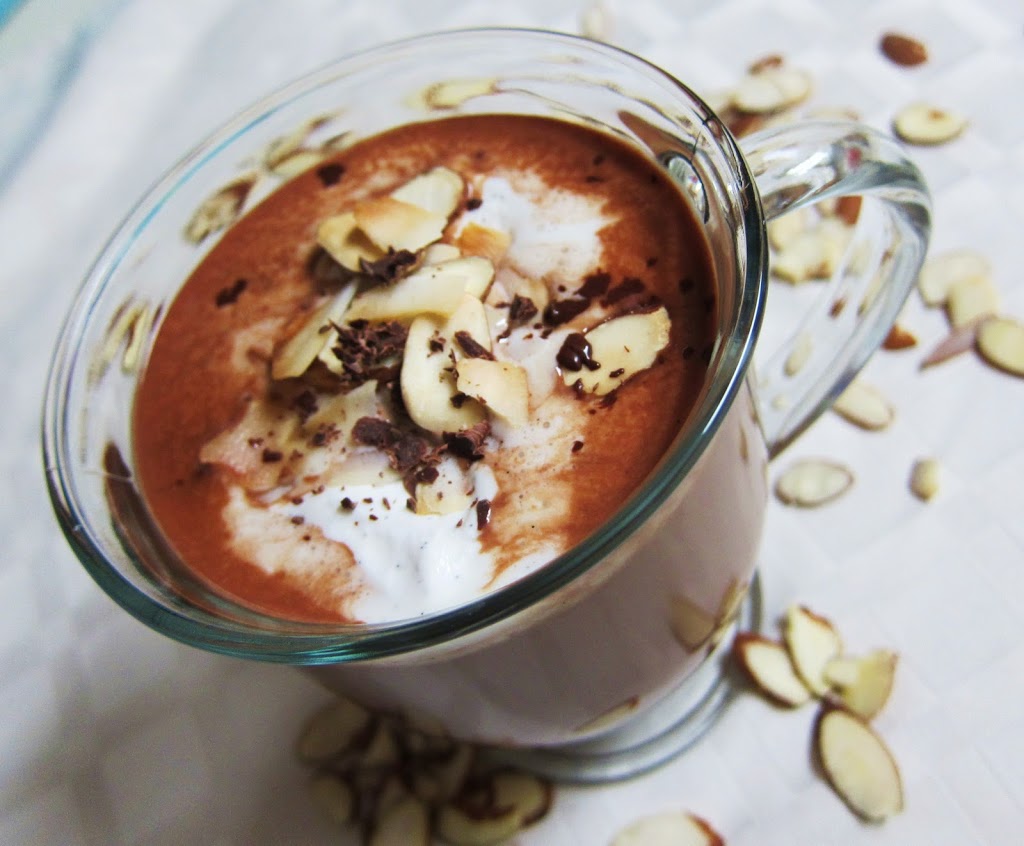 Ok, so I admit it...I haven't had real hot chocolate in years!  It is a tragedy I know.  No, I don't mean the cocoa that comes in the packets, as I refuse to drink that stuff which is mostly just sugar and little chocolate.  I mean the rich melt real chocolate in your milk type. For some reason I was really in the mood for it this weekend so I had to make it no question!  I used to make a version with good quality dark chocolate and milk infused with vanilla beans that I loved, so I used that as a starting point. However, I no longer keep milk in the house, just soy, almond and coconut so it was to be vegan.  I decided on the coconut milk, because if you are going to have dessert, then have dessert!  It is the silkiest and richest of the three and I just love it in drinks.
I didn't want just plain hot chocolate however, I wanted something special...so I came up with a coconut almond variation (as the coconut would already be there) with the flavors of an Almond Joy but much better. I flavored my coconut milk base with real vanilla bean, then melted good quality dark chocolate into it as well as added some almond extract for a sweet almond flavor.  It was divine, and super rich...but it needed something to top it off and make it pretty. I am in love with whipped coconut cream as of lately, and I happened to have some in my fridge from a dessert I made the night before, so I used it to top off my hot chocolate!  It was amazing, the intense dark chocolate with the hint of coconut and almond...the coconut whipped cream slowly melting into it.  Quite beautiful actually if you can call a cup of hot chocolate that!  I enjoyed it far more than if it had been made with whole milk and heavy whipping cream because the coconut milk gave it such a lovely flavor. I will not let it be years before I enjoy hot chocolate again as this was so delicious!  Here is the recipe if you would like to experience it for yourself!