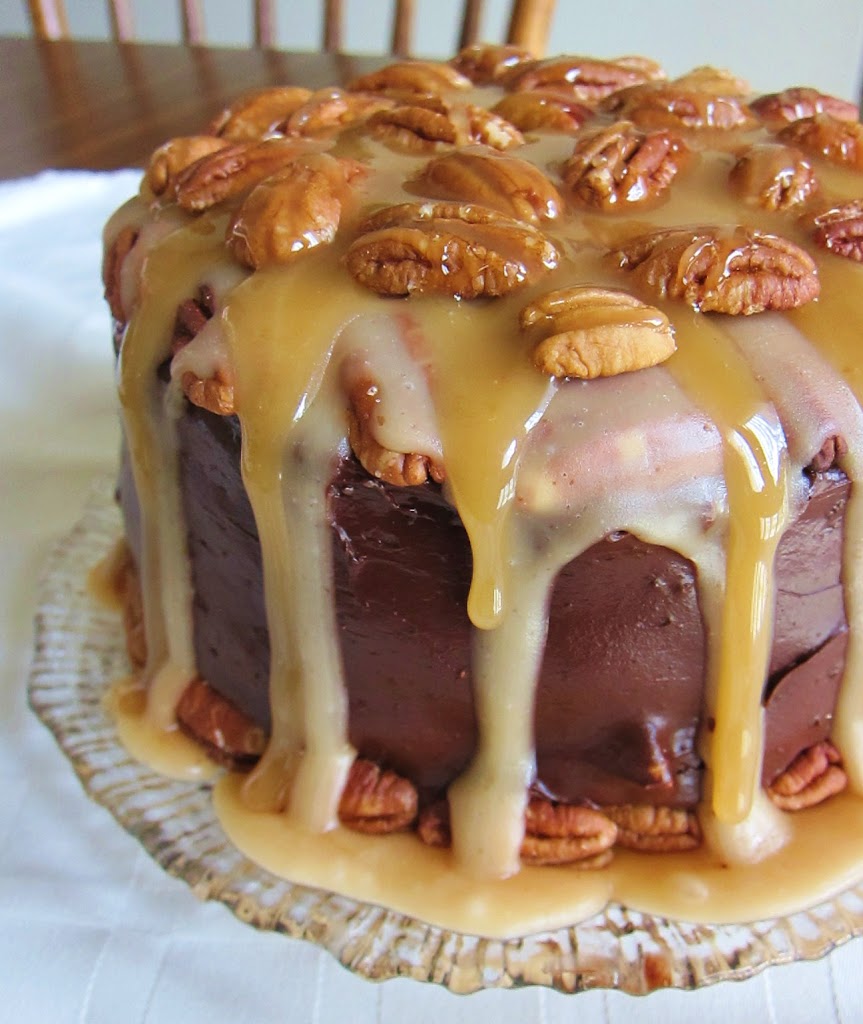 November 7, 2010 By Amy Lyons In Cakes and Cupcakes 98 Comments
It is world Vegan month...so I thought, what better way to celebrate, than make a decadent vegan cake!  What first came to mind was a turtle cake...decadent layers of gooey caramel and chocolate laced with pecans and sandwiched between moist chocolate cake...the type that makes you drool just thinking about it. This cake would be inspired by one I had as a child.  My Mom used to take me to a restaurant in St. Paul called Cafe Latte which is famous for their turtle cake, and it is pretty magnificent with all of it's layers.  I always had to have a nice big piece when she took me there.  But of course theirs is not vegan, so I wanted to create my own veganized version of this fabulous cake that tasted just as decadent, and gooey in every way.
I already had a dark chocolate cake recipe that I was going to use, and a delicious chocolate  fudge frosting, but what was in question was the caramel.  I wanted a maple caramel...I had added maple to the other components of the cake, maple sugar and extract in the cake layers and maple in the frosting.  But I had never made a vegan caramel before, and I was going to try.  I didn't have a specific recipe, and my first attempt failed.  I burned the sugar, and it separated from the coconut oil I had used in place of butter creating a cement like mess in my stockpot...and making me very very frustrated.  But me not being one to give up started over with a new recipe.  This one used coconut milk in place of the heavy cream, and earth balance in place of the butter.  I had my fingers crossed and was praying that it would turn out as I finished it off with the coconut milk...and it did!  It was delicious!  I had forgotten how good home made caramel could be!
I assembled my cake, and I was so anxious to dive in that it only sat for about as long as it took me to take the photos of it.  It was heavenly...decadent, rich, gooey, the toasted pecans mingled in with the brownie like cake and fudge frosting with the salted maple caramel!  Party in my mouth!  You definitely could not tell that it was vegan.  The maple was definitley a good choice to pair with the pecans and chocolate.  If you need a decadent dessert, this would be a must...and I guess you could use store bought caramel if you don't want to deal with making it, just add a little maple extract and sea salt.  Happy Vegan Month!

*If you would like a 4 layer 9 inch cake, double this entire recipe and bake in two 9 inch cake pans.